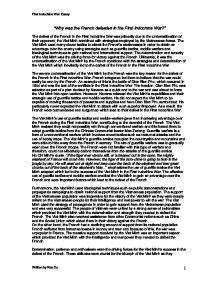 Why was the French defeated in the First Indochina War?

Ho Chi Minh's quote, "If the tiger ever stands still, or is trapped out in the open, the mighty elephant of France will crush him. However, the tiger of the indo-china is going to hide in the jungle by day. He will steal out at night and leap upon the back of the elephant and tear great chunks out of the back of the elephant's hide..." emphasizes the use of guerilla tactics the Viet Minh adapted which led to the success of the Viet Minh in the First Indochina War. The effective use of guerilla tactics and mobile warfare enabled the Viet Minh to gain an advantage over the French and were important factors which lead to the defeat of the French. Furthermore, the Viet Minh used ideological techniques such as public demonstrations and propaganda campaigns to obtain national support from the Vietnamese population. The support of the Vietnamese population was imperative for the victory of the Viet Minh as they were deeply reliant on the Vietnamese people for their intelligence and manpower to win the war. ...read more.