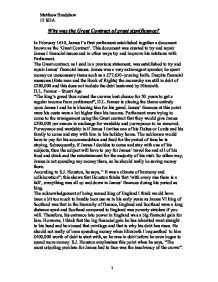 Why was the Great Contract of great significance

Why was the Great Contract of great significance? In February 1610, James I's first parliament established together a document known as the 'Great Contract'. This document was created to try and repair James I financial issues and in other ways try and improve his relations with Parliament. The Great contract, as I said in a previous statement, was established to try and repair James' financial issues. James was a very extravagant spender; he spent money on unnecessary items such as a �77,630-pruning knife. Despite financial measures (Bate man and the Book of Rights) the monarchy are still in debt of �280,000 and this does not include the debt bestowed by Elizabeth. D.L. Farmer - Stuart Age "The king's greed thus ruined the crowns best chance for 50 years to get a regular income from parliament", D.L. farmer is placing the blame entirely upon James I and he is blaming him for his greed. James' finances at this point were his costs were a lot higher than his income. Parliament were trying to come to the arrangement using the Great contract that they would give James �200,000 per annum in exchange for wardship and purveyance to be removed. Purveyance and wardship is if James I invites one of his Dukes or Lords and his family to come and stay with him in his holiday home. ...read more.

Scotland was nothing more than a scrape on England financially and socially. Scotland was after all almost poverty stricken compared to England. James wanted to unite England Scotland and Ireland together. In 1603, it was the first time in 400 years that a Monarch has brought three kingdoms and fused them together into one political entity thus the United Kingdom was born. By 1606, James brought debate about the union between England and Scotland. James was being very ambitious and had a difficult project on his hands. Then by 1607, there were no borders between Ireland, Scotland, and England. All this was asking a bit much of the country and Parliament was not exactly thrilled about the idea. In addition, England was a very proud country and they did not want to have to combine with a new country. They wanted to be unique and be proud of their own nationality. Beside the point they were not fond at first about the idea of a Scotsman coming in as the new heir to throne, so they are definitely not going to welcome this idea with open arms. Moreover, because James is running the country to bankruptcy they are not going to be that thrilled with James himself never mind Scotland. Also, because he has debts to pay out, out of a possible �200,000 he has to give �120,000 to the government and he gets to keep �80,000. ...read more.

they were to start with and England's estimation of James had declined because of his compulsive disorder of ecstatic expenditure nearly declaring England of bankruptcy. Moreover, I think that the most important aim of the contract was to unite parliament and James together but because of problems such as the Bates Case and uniting of England and Scotland and the fact that they could not come to any agreements financially or socially, this caused a 'snapping' between parliament and king, a push and pull between the two. So the Great contract was very significant and if it had worked it could have been successful but it did not work so therefore it was unsuccessful. Although a positive thing you could say was that it helped Parliament and James identify that James had a compulsive-spending problem and that parliament were not as to blame as they thought. They did after all warn him but did not tell him before it all started but because he was new to England he did not know England's financial position and I think that they should have been more responsible and told him everything that was he needed to know about ruling such a powerful country as England and not let him find everything out for himself. In addition, the parliament was actually just as much to blame as James. ?? ?? ?? ?? Matthew Bradshaw 12 SDA 1 ...read more.