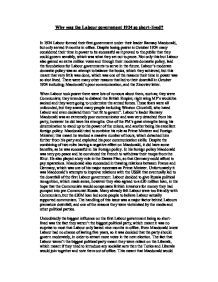 Why was the Labour Government of 1924 so short lived?

Why was the Labour government 1924 so short-lived? In 1924 Labour formed their first government under their leader Ramsay Macdonald, but only served 9 months in office. Despite losing power in October 1924 many considered their time in power to be successful as it proved to the public that they could govern sensibly, which was what they set out to prove. Not only this but Labour also gained an extra million votes and through their moderate domestic policy, laid the foundations for Labour governments to serve in the future. Labour's moderate domestic policy was an attempt to balance the books, which they achieved, but this meant that very little was done, which was one of the reasons their time in power was so shot lived. There were many other reasons that led to their downfall in October 1924 including; Macdonald's poor communication, and the Zinoviev letter. When Labour took power there were lots of rumours about them, such as; they were Communists; they intended to disband the British Empire; right wing MP's would be sacked and they were going to undermine the armed forces. ...read more.

Even Macdonald knew Labour had no chance of lasting five years, so it was decided that the party should govern moderately, in order to attract more votes in the next election. The fact that Labour weren't the biggest political party meant they were reliant on the Liberals, which meant if they tried to introduce any socialist acts then the Tories and Liberals would join together and vote them out of office. This meant that Macdonald would have to govern in a way that didn't antagonize the Liberals, but also pleased left wing Labour MP's, which was a virtually impossible task. Another problem for Labour was they were in power during high unemployment and economic depression, so there plan to govern moderately and balance the books meant that they could not properly tackle unemployment. Their attempts to keep the government in the black did not suit the economic slump, as it led to very few social reforms, which led people to believe they were doing nothing to tackle the problems of the working man. The Wheatley housing act was Labour's main success during their term in government, as they increased subsidies to �9 and increased the period of time to 40 years. ...read more.

In fact, Labour only had one left wing minister, in John Wheatley. This attitude towards Labour was one of the reasons Labour found it difficult to govern during their first term in government, and when combined with Macdonald's over work and detachment from his party it became one of the major reasons for it's downfall. In conclusion, there were a number of factors which contributed to Labour's first government being so short lived. However, I believe Labour only being the second biggest political party was the main factor because they were the first British government to believe in socialism, which meant they were always going to be victimized by the right wing parties and at the first opportunity they would join together and vote Labour out of office, as they did. Not only this, but not being the biggest political party meant Labour would have to govern in a way that pleased the Liberals, which meant they couldn't govern in the way they would have wanted to. Despite only serving nine months Labour achieved most of their aims; by gaining political experience; shown the voters they were a sensible party and gained a million votes in the process. ...read more.