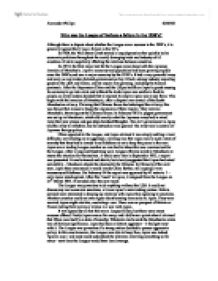 Why was the League of Nations a failure in the 1930's?

Why was the League of Nations a failure in the 1930's? Although there is dispute about whether the League was a success in the 1920's, it is generally agreed that it was a failure in the 30's. In 1929, the Wall Street Crash started a long depression that quickly led to economic problems throughout the world, damaging trade and industry of all countries. It led to negatively affecting the relations between countries. Im 1931, the first major test for the League came about with the Japanese invasion of Manchuria. Japan's economy and population had been growing rapidly since the 1900's,and was a major economy by the 1920's. It had a very powerful army and navy, so any leader dictated government policy. It had a strong industry exporting goods to the USA and China, and its empire was growing, including the Korean peninsula. After the Depression China and the US put tariffs on Japan's goods causing its economy to go into crisis and without the trade Japan was unable to feed its people; so army leaders decided that to expand its empire Japan was to use force. This began with the invasion of Manchuria, after a dispute over control of the South-Manchurian railway. ...read more.

In the 1930's there was an increased pressure for disarmament. The Germans had long been sour over the fact that they had been forced to disarm after the First World War while no other countries had. Many countries were spending more on armaments than they had before the war! At the wake of the Manchurian crisis the League finally realised the seriousness of the problem and the long-promised disarmament conference finally began in February 1932. By July of that year resolutions prohibiting bombing of civilian populations, limiting artillery size and tonnage of tanks and prohibiting chemical warfare were produced. The problem was there were very little resolutions to show how these limits would come under way. For example along with prohibiting civilian bombing should have been the abolishment of planes capable of bombing, but this was defeated. Also the proposal to ban chemical warfare was defeated. The bigger problem was what should be done about Germany, who had been in the League for six years. Most people felt they should be treated more fairly than the Treaty of Versailles had decided - the question was whether or not everyone should disarm to the level of the Germans or whether Germany should be allowed to rearm to a level closer to that of other powers. ...read more.

Hoare, the British foreign minister made a grand speech to the League emphasising the value of collective security and there was much negotiating. Coming down to it, however, the League never actually did anything to discourage Mussolini. Pierre Laval, France's foreign minister more or less had given Mussolini signs that he would not intervene, and despite mush talk from the British they never backed what they said. There were two things that the League could have done. Had they strongly opposed Mussolini, i.e. with strong diplomatic signals pre the invasion and sanctions or even military intervention post the invasion, Mussolini would have probably backed off. On the other hand they could have allowed the Invasion and not condemn it, i.e. go along with Mussolini, hence maintaining good relations with him, separating him from Hitler. Although this option is morally wrong, it would have been a good long-term option. Doing nothing, however, having condemned Mussolini's actions distanced Mussolini, and also showed Hitler that the League was weak and that they would never intervene. The incident can be thought of as a fatal blow to the League, unlike with Japan, Italy was a neighbour - there was no excuse and the League had failed at this test. Alexander Phillips 02/03/03 ...read more.