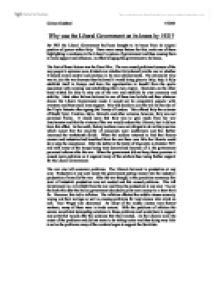 Why was the Liberal Government on its knees by 1921? By 1921 the Liberal Government had been brought to its knees from its original position of power within Italy. There were many factors for this, each one of them highlighting a weakness in the Liberal's system of government and thus causing them to loose support and influence, in effect bringing the government to its knees. The first of these factors was the Great War. The war caused problems because of the way people's opinions were divided over whether Italy should join the war or whether it should remain neutral and continue in its own advancements. The nationalist view was to join the war because they believed it would bring glory to Italy, help it fully establish itself in Europe and have the opportunities to benefit from the spoils associated with winning and establishing their own empire. Socialists on the other hand wished for Italy to stay out of the war and establish its own economy and stability. Most other Italians believed in one of these two beliefs and thus whatever choice the Liberal Government made it would not be completely popular with everyone and thus could loose support. ...read more.

The Socialists did not pose a direct threat to the Liberals due to their revolutionary ways. They could not be absorbed into the political system by Giolitti because of this. The Socialists supported the factory occupations and strikes as well as being supported by many of the trade unions. The support for these strikes and occupations did cause problems for the Liberals though, this is because many of the respectable middle classes were frightened by the occupations and the strikes and so turned away from the liberal system which seemed incapable of dealing with the problems. The inability of the Liberals to take action was further highlighted with the situation in Fuime and the events that led to the rise of fascism. On the 10th of September 1919 Prime Minister Nitti signed The Treaty of St. Germain. In doing this the government had accepted that they would not be getting all the colonies which they were promised in the Treaty of London. Italy did not get Dalmatia because it was awarded to Yugoslavia due to President Woodrow Wilson's 14 point program. Fuime was also given to Yugoslavia. The poet Gabriele D'Annunzio, supported by 2000 ex soldiers, began an occupation of Fuime in 1919. ...read more.

This caused problems and reduced the Liberal Government's power as they no longer had enough seats to run things effectively. This got worse by 1921 with the Liberals only getting 47 even though the total government votes went up from 36.9% in 1919 to 47.8% in 1921. The significance of this election was that over half the seats were occupied by Communist PPI and the PSI, and the government parties also had become more divided making it very difficult to form a stable government. There were many things that brought the Liberals to their knees by 1921 but the most significant seemed to be the weakness and indecisiveness of the Liberal Government in the face of problems such as Fuime and the Socialist threats. It was due to their weakness in these situations that led to Italians looking for alternative parties that might actually do something, with Fuime demonstrating how radical action can work. Because there was a reason for people to be supporting other political parties due to the indecisiveness of the Liberals, this in turn reduced the stability of the Liberals within government because they were losing the majority of seats, and it was this which brought the Liberal Government to its knees by 1921. ?? ?? ?? ?? Callum Goddard 7/12/05 ...read more.