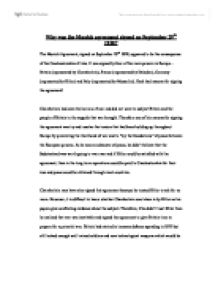 Why was the Munich agreement signed on September 29th 1938?

Why was the Munich agreement signed on September 29th 1938? The Munich Agreement, signed on September 29th 1938, appeared to be the consequence of the Czechoslovakian Crisis. It was signed by four of the main powers in Europe - Britain (represented by Chamberlain), France (represented by Daladier), Germany (represented by Hitler) and Italy (represented by Mussolini). Each had reasons for signing the agreement! Chamberlain had seen the horrors of war and did not want to subject Britain and the people of Britain to the anguish that war brought. Therefore one of his reasons for signing the agreement was try and resolve the tension that had been building up throughout Europe by preventing the likelihood of war and to "lay the foundations" of peace between the European powers. ...read more.

Britain had started to increase defence spending in 1935 but still lacked enough well trained soldiers and new technological weapons which would be very important when facing Germany. So, the temporary peace time, which would come from signing the agreement, would allow Britain to better equip itself. There were also political reasons why Chamberlain signed the agreement. One of the main ones was that there was speculation in Britain whether the public would support another war. Chamberlain and other politicians did not want loss popularity so they chose the agreement to keep on the public's side. The other powers also had reasons to sign the agreement. ...read more.

Mussolini probably thought that if he signed the agreement, he could have future alliances if war was to break out. This would be because the agreement could be used to make a friendly pact between countries. Daladier of France was also involved in the signing of the agreement. He had the same ideas in mind as Chamberlain, as he also did not want to risk a war over the Sudetenland of Czechoslovakia. This was because at this time, France was not prepared to fight another major war, so signed the agreement without any pressure from outside factors. In conclusion, each leader in Europe had their own reasons for signing the agreement, but overall it led to a longer period of peace than could have been expected with the growing tension. ...read more.