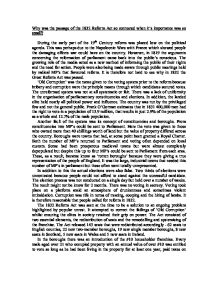 Why was the passage of the 1832 Reform Act so contested when it's importance was so small?

Why was the passage of the 1832 Reform Act so contested when it's importance was so small? During the early part of the 19th Century reform was placed low on the political agenda. This was perhaps due to the Napoleonic Wars with France which showed people the damaging effects war could have on the country. However, in 1819 the arguments concerning the reformation of parliament came back into the public's conscious. The growing role of the media acted as a new method of informing the public of their rights and the need for action. People were also being made aware through public meetings held by radical MP's that favoured reform. It is therefore not hard to see why in 1832 the Great Reform Act was passed. 'Old Corruption' was the name given to the voting system prior to the reform because bribery and corruption were the principle means through which candidates secured votes. ...read more.

The election process was not conducted on a single day but held over a number of weeks. The result might not be know for 2 months. There was no voting in secrecy. Voting took place on a platform amid an atmosphere of drunkenness and sometimes violent intimidation. Corruption was rife in terms of treating, cooping and the hiring of lambs. It is therefore reasonable that people called for reform in 1832. The 1832 Reform Act was seen at the time to be a solution to an ongoing problem highlighted by popular unrest. It attempted to correct the failings of 'Old Corruption' whilst ensuring the elites in society retained their grip on power. The Act consisted of two essential elements, the redistribution of seats and the remodelling and systemising of the franchise. The Act released 143 seats that were redistributed accordingly - 62 seats to English counties, 22 new two-member boroughs, 19 new single member boroughs, 8 new seats in Scotland, 5 new seats in Wales and 5 new seats in Ireland. ...read more.

In the short term, the 1832 Reform Act did not institute a dangerously democratic political structure. The number of voters doubled and approximately 717,000 people could vote. Those 717,000 consisted of 18% of the male population of England which meant that there was a 6% increase. It brought some of the upper middle class into order but till all interests and classes were not represented in Parliament. More people had the right to vote but they came from a more limited sector of society. With so many people till excluded from franchise, there began a realisation that the points of view of the people were not being recognised. So why was such a fuss made about this Act if it didn't change an awful lot? The Reform Act of 1832 had been the initial break with tradition. Before this event nobody had realistically contested the supremacy of the Upper Classes or tried to bridge gaps in the order of society. From now on it would be difficult to resist the demands for change and the extension of the vote to a greater number of people. ...read more.