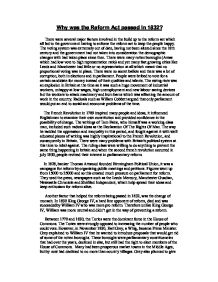 Why was the Reform Act passed in 1832? There were several major factors involved in the build up to the reform act which all led to the government having to enforce the reform act to keep the people happy. The voting system was extremely out of date, having not been altered since the 18th century and the government had not taken into consideration the demographic changes with had taken place since then. There were many rotten boroughs (Areas which had low vote to high representation ratio) and yet many fast growing cities like Leeds and Manchester had little or no representation at all which meant that no proportional voting was in place. There were no secret ballots and there was a lot of corruption, both in elections and in parliament. People were bribed to vote for a certain candidate for money instead of their qualities and talents. The swing riots was an explosion in Britain at the time as it was such a huge movement of industrial workers, unhappy at low wages, high unemployment and new labour saving devices led the workers to attack machinery and burn barns which was affecting the amount of work in the country. ...read more.

Between 1770 and 1830, the Tories were the dominant force in the House of Commons. The Tories were strongly opposed to increasing the number of people who could vote. However, in November 1830, Earl Grey, a Whig, became Prime Minister. Grey explained to William IV that he wanted to introduce proposals that would get rid of some of the rotten boroughs. These boroughs were parliamentary constituencies that had over the years, declined in size, but still had the right to elect members of the House of Commons. Many had been prosperous market towns in the Middle Ages, but by now had declined to no more than country villages. Grey also planned to give Britain's fast growing industrial towns such as Manchester, Birmingham, Bradford and Leeds, representation in the House of Commons. In April 1831 Grey asked William IV to dissolve Parliament so that the Whigs could secure a larger majority in the House of Commons. Grey explained this would help his government to carry their proposals for parliamentary reform. William agreed to Grey's request and after making his speech in the House of Lords, walked back through cheering crowds to Buckingham Palace. ...read more.

With London the scene of huge and stormy demonstrations, Earl Grey and his Whig government tried again to introduce a Reform Act. Finally, on 13th April 1832, the Reform Act was passed by a small majority in the House of Lords. Overall, the old political system was out dated and with all the problems occurring, something needed to be done. The most important event which was the turning event, was the change in government attitude, the introduction of the Whigs who were pro reform and with a leader Earl Grey who was determined to continue to not only get pro reform candidates elected but to get a reform passed even if he failed the first time and prevented by those who were averse to reform. The Whigs also had close links with industrialists and supported moderate political and social reform, unlike most Tories who strongly supported the interests of the aristocracy and were opposed to reform of any kind. The pressure of riots, foreign revolutions, and pressure groups also caused the change in attitude that soon forced and persuaded parliament to change their minds and allow the reform bill to be passed in 1832. ?? ?? ?? ?? ...read more.