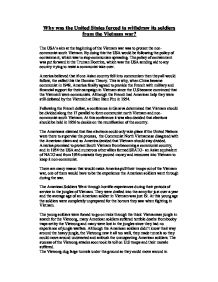 Why was the United States forced to withdraw its soldiers from the Vietnam war? The USA's aim at the beginning of the Vietnam war was to protect the non-communist south Vietnam. By doing this the USA would be following the policy of containment, which was to stop communism spreading. The policy of containment was put forward in the Truman Doctrine, which was the USA sending aid to any country trying to resist a communist take over. America believed that if one Asian country fell into communism then they all would follow, the called this the Domino Theory. This is why, when China became communist in 1949, America finally agreed to provide the French with military and financial support for their campaign in Vietnam since the U.S became convinced that the Vietminh were communists. Although the French had American help they were still defeated by the Vietminh at Dien Bien Phu in 1954. Following the French defeat, a conference in Geneva determined that Vietnam should be divided along the 17 parallel to form communist north Vietnam and non-communist south Vietnam. At this conference it was also decided that elections should be held in 1956 to decide on the reunification of the country. The Americans claimed that free elections could only take place if the United Nations were there to supervise the process, the Communist North Vietnamese disagreed with the American claim and so America decided that Vietnam should stay divided. ...read more.

This turned many normal Vietnamese against the Americans and explains why U.S tactics such as 'pacification' were such a failure. The Vietcong used A.k47 salt rifles which could carry a lot of bullets and so they wouldn't run out of bullets during an attack. Whereas the Americans used M16 assalt rifles which couldn't carry as many bullets and so during an attack they may have ran out. The Vietcong also used rocket launches which could bring down the U.S helicopters and so would stop the helicopters being able to drop their bombs or to take casualties and supplys to and from the base camps. This could leave to The U.S troops being undernourished aswell as causing many American deaths. During the Vietnamese war many reporters portrayed the war as it really was, recording all the horrific scenes that went on and broadcasting them to the American public. When the Americans saw the terrible way that the American troops were acting, and because aware of all the deaths and massacres they turned against the war and many organised peace protests. This would eventually put pressure on the government to withdraw the troops. In some senses Vietnam was very much a "media war", fought on newspapers and television as much as in the jungles of Vietnam. ...read more.

So the U.S government finally pulled their troops out of Vietnam. In my opinion the most important cause for U.S withdrawal from Vietnam was the Media coverage. I believe this because the media showed the American people what the U.S troops were doing, and how they were murdering and raping the Vietnamese, this caused the American people to turn against the war and those fighting it. With the American troops having access to the newspapers they were able to see that their own country was turning against them and this caused low morality across American troops. The realisation throughout the U.S troops that their own people were against the war that they were fighting and dying for caused them to turn to drugs to escape the reality. This caused the American soldiers in Vietnam to not fight to the best of their ability. If the media had not been able to televise the war then I believe that the american public would have been oblivious to the horrors that were happening in Vietnam and therefore the peace protests would not have occurred. This would have meant that the Government was under less pressure to withdraw American troops from Vietnam and so the war may have gone on for a lot longer than it did, and maybe with a very different outcome. ?? ?? ?? ?? ...read more.