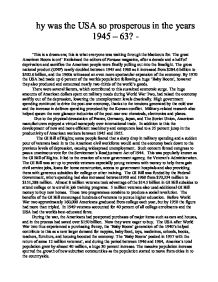 hy was the USA so prosperous in the years 1945 - 63? - 'This is a dream era; this is what everyone was waiting through the blackouts for. The great American Boom is on!' Exclaimed the editors of Fortune magazine, after a decade and a half of deprivation and sacrifice the American people were finally pulling out into the limelight. The gross national product (GNP) nearly doubled between 1945 and 1960 as it increased from $284.6 billion to $502.6 billion, and the 1960s witnessed an even more spectacular expansion of the economy. By 1970 the USA had made up 6 percent of the worlds population following a huge 'Baby Boom', however they also produced and consumed nearly two-thirds of the world's goods. There were several factors, which contributed to this sustained economic surge. The huge amounts of American dollars spent on military needs during World War Two, had raised the economy swiftly out of the depression, lowering the unemployment levels drastically. High government spending continued to drive the post-war economy, thanks to the tensions generated by the cold war and the increase in defence spending provoked by the Korean conflict. ...read more.

These two programmes combine to produce a social revolution. The benefits of the GI Bill encouraged hundreds of veterans to pursue higher education. Before World War two approximately 160,000 Americans graduated from college each year, but by 1950 the figure had more than tripled. In 1949 veterans accounted for 40 percent of all college enrolments and the USA had the worlds best-educated force. During the war, the Americans had postponed purchases of major items such as cars and houses, and in the process had saved over $150 billion. Now they were eager to buy. The USA after World War two thus experienced a purchasing frenzy, the 'Baby Boom' generation of the 1940's helped contribute to this as a new larger demand for nappies, baby food, toys, medicines, schools, books, teachers, furniture, and housing boosted the economy. The 'Baby Boom' peaked in 1957 with the return of some 12 million veterans', and during the period between 1946 and 1964, America's total population grew by almost 40 million, a huge 30 percent increase. ...read more.

The Cold War was an important reason for US economic strength. People got higher wages for their jobs, which left them with more spending money, and to go with this the threat of a nuclear holocaust put a 'live now pay later/no tomorrow' attitude encouraging people to spend money on pleasure items like flash cars and women. In September 1949 the Russians exploded their first atomic bomb, this contributed to the arms race with the USA this meant that the US defence industries had an enormous boost. As paranoia about Communist world domination spread in the USA the Government boosted a large percent of the GNP to the aerospace development in Florida and California, who alone had the sixth largest economy in the world during the Cold War, this meant that companies like Convair (a missile building company), Higley Corporation (an aironautics company), and Lockheed Aerospace flourished during the Cold War. American involvement in the Korean War in 1950 meant that even more had to be spent on defence in the form of more conventional weapons. As a result of all this the US economy became so prosperous during the period of 1945-1963. ...read more.