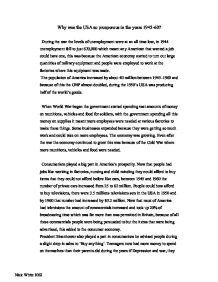 Why was the USA so prosperous in the years 1945-60? During the war the levels of unemployment were at an all time low, in 1944 unemployment fell to just 670,000 which meant any American that wanted a job could have one, this was because the American economy started to turn out large quantities of military equipment and people were employed to work at the factories where this equipment was made. The population of America increased by about 40 million between 1945-1960 and because of this the GNP almost doubled, during the 1950's USA was producing half of the world's goods. When World War began the government started spending vast amounts of money on munitions, vehicles and food for soldiers, with the government spending all this money on supplies it meant more employees were needed at various factories to make these things. ...read more.

permitted in Britain, because of all these commercials people were being persuaded to but the items that were being advertised, this added to the consumer economy. President Eisenhower also played a part in consumerism he advised people during a slight drop in sales to 'Buy anything'. Teenagers now had more money to spend on themselves than their parents did during the years if Depression and war, they were certainly better off than young people in other countries. For the first time teenage fads products such as transistor radios, magazines, rock 'n' roll records and Elvis movies. Those that lived through the 1930s now recognised that the country was now truly out of depression. President Eisenhower wanted the economy to continue growing so they cut taxes on businesses and wealthy individuals this made them much better off. ...read more.

Roads also had to be build this meant that there was even more money and jobs available. Women also added to the growth of the economy, before the war most women worked at home cooking and cleaning. The war years increased opportunities for women to get paying jobs while their husbands were at war. 6 million women entered factories engaged in war production; nearly 200,000 joined the armed forces in the Women's Army Corps, some women join the American Red Cross and others worked as machinists, toolmakers, stevedores and even rail tracklayers. Overall I believe that it was President Eisenhower who contributed mostly to America's prosperity in the years 1945-1960. He was a dedicated president and the things that he changed to increase America's economy were very effective, he cut taxes on businesses and wealthy individuals and he ended controls on wages and prices, I think these were the most effective changes and they made America a very happy and prosperous country. ...read more.