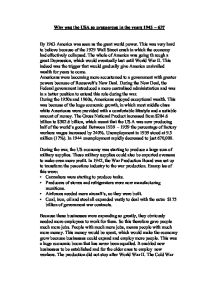 Why was the USA so prosperous in the years 1945 - 63? By 1963 America was seen as the great world power. This was very hard to believe because of the 1929 Wall Street crash in which the economy had effectively collapsed. The whole of America was going through a great Depression, which would eventually last until World War II. This indeed was the trigger that would gradually give America unrivalled wealth for years to come. Americans were becoming more accustomed to a government with greater powers because of Roosevelt's New Deal. During the New Deal, the Federal government introduced a more centralised administration and was in a better position to extend this role during the war. During the 1950s and 1960s, Americans enjoyed exceptional wealth. This was because of the huge economic growth, in which most middle class white Americans were provided with a comfortable lifestyle and a suitable amount of money. The Gross National Product increased from $284.6 billion to $502.6 billion, which meant that the USA was now producing half of the world's goods! Between 1939 - 1959 the percentage of factory workers wages increased by 240%. Unemployment in 1939 stood at 9.5 million (17%). ...read more.

People were encouraged to spend through many different factors, one of them being advertising. Advertising on T.V was very popular because by 1956 over 81% of Americans owned a T.V. Almost all television stations were commercial and 20% of broadcasting time was taken up by commercials. So therefore the company's message could reach people, more effectively. Hire purchase was another big factor, which encouraged people to spend their money. Instead of paying the full amount for an item, you could pay it off in monthly instalments. This obviously helped America's businesses because more people were buying their products, which in turn means that the business is going to expand, which means they will need to employ more people. This idea certainly appealed to many Americans, who thought it was a more efficient way of purchasing goods. President Eisenhower perhaps played the biggest part of encouraging people to spend. He did this by first of all cutting taxes on businesses and rich people and ended controls on wages and prices. This had a huge impact because there was now more profit. This meant that people could invest in businesses, which lead to more jobs, more products and more economic prosperity generated. ...read more.

The key factor for this was World War II. This generated more money for the USA than they thought was conceivable. Because so many businesses were expanding greatly to provide for the war, they obviously needed more employees to work for them. So this therefore gave people much more jobs, which in turn gave people much more money. This money would be spent on consumer goods, which would make the economy grow. President Eisenhower played a big part in encouraging people to spend. He managed to somehow cut taxes on businesses and rich people and end controls on wages and prices. This had a huge impact because there was now much more profit. This meant that people could invest in businesses, which lead to more jobs, more products and more economic prosperity generated. This was the biggest economic boom in the history of the world. The war economy also boosted agriculture as farmers had an assured market in feeding the armed forces. Americans at home relished a speedy increase in their income and their way of life. The simplest but the most influential aspect for their wealth and success was World War II. It had ironically brought a permanent end to the Depression, and replaced it with prosperity that would last for a very long time to come. ...read more.