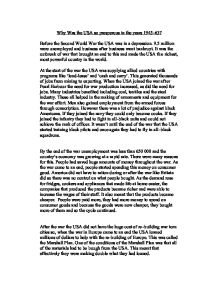 Why Was the USA so prosperous in the years 1945-63? Before the Second World War the USA was in a depression. 9.5 million were unemployed and business after business went bankrupt. It was the outbreak of war that brought an end to this and made the USA the richest, most powerful country in the world. At the start of the war the USA was supplying allied countries with programs like 'lend-lease' and 'cash and carry'. This generated thousands of jobs from mining to exporting. When the USA joined the war after Pearl Harbour the need for war production increased, as did the need for jobs. Many industries benefited including coal, textiles and the steel industry. These all helped in the making of armaments and equipment for the war effort. Men also gained employment from the armed forces through conscription. However there was a lot of prejudice against black Americans. If they joined the navy they could only become cooks. If they joined the infantry they had to fight in all-black units and could not achieve the rank of officer. ...read more.

This was called the Marshall Plan. One of the conditions of the Marshall Plan was that all of the materials had to be bough from the USA. This meant that effectively they were making double what they had loaned. There was also a huge rise in population because all of the soldiers who had been fighting in the Pacific and in Europe came home to their wives and girlfriends. Known as the baby boom this also helped the USA's economy. A whole new industry was needed to provide the goods for raising a family. It also helped lower the unemployment rate and provide a workforce in the future. Televised advertising was introduced in the 1950's. This took particular advantage of the television boom which was made possible by the consumer goods cycle. At it's peak. 20% of broadcast time was taken up with commercials. Advertising encouraged people to buy, especially consumer goods and cars. Food and drink was also advertised making many companies such as Coca-Cola become huge international corporations. Near the end of the 50's sprawling suburbs sprang up around the major cities. ...read more.

The Korean War saw the USA and Britain fighting for South Korea against communist North Korea, which was supported by the Russians. Because of this the USA continued to produce weapons once the war had ended. This meant that industries such as coal, iron, steel and the munitions industry continued to grow, providing jobs and good wages. After the 1950's the economy began to fluctuate. When President Kennedy took over from Roosevelt he had to deal with higher unemployment. Minority groups, such as black Americans and women, were dissatisfied with their way of life. He had to make the population believe that the government were trying to do something about it. Kennedy attempted to do this with a plan he called 'The New Frontier'. A deliberate part of this plan was not balancing the budget to increase economic growth. Also included was a program of public works costing $900 000 000. He cut taxes and increased the minimum wage. Built many public buildings, like schools and libraries and helped minority groups, especially black Americans. By the end of the 60's the USA's economy was the strongest in the world. War, babies, cars, advertising, 'lend-lease' and 'cash and carry', teenagers, increased employment and Kennedy's 'New Frontier' all helped to achieve this. ...read more.