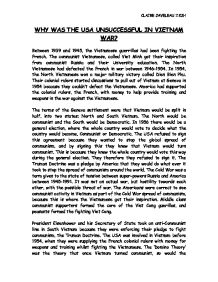 Why Was the USA unsuccessful in the Vietnam war?

WHY WAS THE USA UNSUCCESSFUL IN VIETNAM WAR? Between 1939 and 1945, the Vietnamese guerrillas had been fighting the French. The communist Vietnamese, called Viet Minh got their inspiration from communist Russia and their University education. The North Vietnamese had defeated the French in war between 1946-1954. In 1954, the North Vietnamese won a major military victory called Dien Bien Phu. Their colonial rulers started discussions to pull out of Vietnam at Geneva in 1954 because they couldn't defeat the Vietnamese. America had supported the colonial rulers, the French, with money to help provide training and weapons in the war against the Vietnamese. The terms of the Geneva settlement were that Vietnam would be split in half, into two states; North and South Vietnam. The North would be communist and the South would be Democratic. In 1956 there would be a general election, where the whole country would vote to decide what the country would become, Communist or Democratic. The USA refused to sign this agreement because they wanted to stop the global spread of communism, and by signing this they knew that Vietnam would turn communist. This is because they knew the whole country would vote this way during the general election. They therefore they refused to sign it. The Truman Doctrine was a pledge by America that they would do what ever it took to stop the spread of communism around the world. ...read more.

American was particularly keen to take a tough stand in Vietnam after their failure in Cuba, because they could not let Russia think they had the upper hand. If Vietnam turned Communist, then the Russians would have enough power to take on the world. Kennedy agreed to a CIA plan to remove Diem from power because he was turning his own people against the democratic beliefs of the South with his harsh policies. They did not support the government, and were beginning to turn towards the communist beliefs. America had to halt this process, to try and save as much support for Democracy as possible. The Viet Cong were so powerful in South Vietnam because they had turned against their Democratic government and now supported the Viet Cong. By 1963, it looked like the Vietcong were going to defeat the combined forces of the USA and South Vietnam. This was highly embarrassing to America, and they needed to attack the Vietcong. The USA claimed that the Vietcong attacked their ships, but the Vietcong did not admit to this, whereas they had admitted all of their previous attacks, because they were proud of them. The Ho Chi Minh trail was a series of routes that the Viet Cong supplied arms to their fighters in the South. This meant that the South Vietnamese guerillas could attack the Southern democrats easier. ...read more.

They were only there for 4 weeks. In 1971, Laos turned communist. It seemed like a random choice, but Laos was a very similar, poor country like Vietnam, with a small percentage of the population owning a very large percentage of the wealth. In 1970-1971, whilst the peace protests were in full swing, four teenagers were shot at Kent State University, and Nixon called these protestors 'bums'. Meaning that they should not be lazing around protesting, but should be out in Vietnam fighting for their country. Linebacker 1 and Linebacker 2 were bombing campaigns against Vietnam. The US did not withdraw from Vietnam with honour, the tried to sneak out with as few people noticing their defeat as possible. After the US withdrawal from the South, they were attacked and taken over by the Communist North. The Vietnam War damaged US standing in the eyes of its citizens and the rest of the world, because it showed everyone that they not as merciful, and powerful as they claimed to be. The view of the war as shown in US films is not very accurate at all, because they are biased. An American film would show the film as they thought it was and not how it actually was. The casualties of the war do not have the opportunity to their side of the war. Their voices were never heard, and their views were never listened to. CLAIRE JAVELEAU 11KJH ...read more.