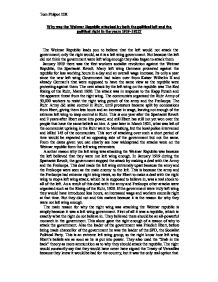 Why was the Weimar Republic attacked by both the political left and the political right in the years 1919-1922? The Weimar Republic leads you to believe that the left would not attack the government; only the right would, as it is a left wing government. But because the left did not think the government were left wing enough they also began to attack them. January 1919 there was the first workers socialist revolution against the Weimar Republic, the Spartacist Revolt. Many left wing Germans protested against the republic for less working hours in a day and an overall wage increase. Its only a year since the new left wing Government had taken over from Kaiser Wilhelm II and already German's that were supposed to have the same view as the republic were protesting against them. The next attack by the left wing on the republic was The Red Rising of the Ruhr, Marsh 1920. The attack was in response to the Kapp Putsch and the apparent threat from the right wing. The communists organised the Ruhr Army of 50,000 workers to resist the right wing putsch of the army and the Freikorps. ...read more.

This deal made the left wing extremely upset because the army and the Freikorps were seen as the main enemy to the left. This is because the army and the Freikorps had extreme right wing views, so for Ebert to make a deal with the right wing to stop a left wing attack, which he is supposed to believe in, was a real shock to all of the left. As a result of this deal with the army and Freikorps other attacks were organised such as the Rising of the Ruhr, 1920. If the government were truly left wing they would have introduced less hours, an increased wage and workers councils right at that time. But they did not and this matters because it is the reason for why they were not left wing enough. The main reason for why the right wing was attacking the Weimar republic is simply because it was a left wing government. First of all it was a republic, which is exactly what the right do not believe in. They believed there should be an all-powerful monarch in the government. ...read more.

So they thought that they should get into power, to deal with the threat. The right believed that if the Spartacist revolt was dealt with properly then the left would have continued to attack. This is the reason for the Kapp Putsch because the right attempted to over throw the government to ultimately deal with the left wing. This matters because the left will continue to attack the republic more because they are not getting punished properly and therefore the right will want to take over to deal the threat of the left. All four of the main points are all very significant because they show us why the left and the right both continued to attack the Weimar Republic 1919-1922, whether it was because the government was not left wing enough or because the republic did not deal the left wing threat effectively. I think the most important point that caused the republic to be continually attacked was the deal that Ebert made with the army and the Freikorps. If he did not make this deal and gave the workers what they wanted earlier then the left wing would like the government, giving the right one less reason as to why they should attack the government. Tom Philpot 12R ...read more.