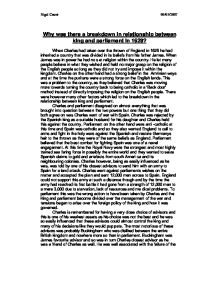 Why was there a breakdown in relationship between king and parliament in 1629?

Why was there a breakdown in relationship between king and parliament in 1629? When Charles had taken over the thrown of England in 1625 he had inherited a country that was divided in its beliefs from his father James. When James was in power he had no set religion within the country. He let many people believe in what they wished and held no major grasp on the religion of the English people so long as they did not try and impose it within the kingdom. Charles on the other hand had a strong belief in the Arminian ways and at the time the puritans were a strong force on the English lands. This was a problem to the country, as they believed that Charles was moving more towards turning the country back to being catholic in a 'Back door' method instead of directly imposing the religion on the English people. There were however many other factors which led to the breakdown in the relationship between king and parliament. Charles and parliament disagreed on almost everything that was brought into question between the two powers but one thing that they did both agree on was Charles want of war with Spain. Charles was rejected by the Spanish king as a suitable husband for his daughter and Charles held this against the country. Parliament on the other hand were anti-catholic at this time and Spain was catholic and so they also wanted England to call to arms and fight in the ...read more.

This upsets the king as he feels that parliament are trying to take away his powers. Parliament think that doing this will mean that Charles will be dependant on them and will not be able to get rid of them. This was, however, not to be. Charles has a tendency throughout this period to take everything that happens between himself and parliament personally and does not think that parliament is doing what it thinks is best but is instead constantly doing things against him and in 1629 he carries on collecting tonnage and poundage 'Illegally'. Charles shows his unquestioned loyalty to Buckingham when parliament try to make a trade for Charles to drop Buckingham in return for a constant supply of money at set dates. Charles dissolves parliament to save Buckingham. After this dissolving of parliament Charles has no source of money left legally so he resorts to forced loans from the nobility of England. If anyone refused to pay the king these fees, which he demanded, he threatened to lock them up without trial. This was an impeachment of the magna carter, which forbid this action. His other way of getting around this was to conscript you into the army. The gentry and nobility which were Charles greatest ally were beginning to lose faith in him as he showed little respect for them when he imposed these loans on them and the treatment they received if they refused. ...read more.

to impose Catholicism upon the English people again and being as they were all puritans they did not want this to happen. With his wife and by now his most loyal advisor being catholic they thought that she would be able to persuade her husband into making England become a catholic nation once more. On a spectrum arminianism is closest to Catholicism out of all of the religions that were around at the time. Because of this closeness puritans thought that it was a back door route to becoming catholic. Charles had strong beliefs in why parliament was dissolved by him. He states, "...Through all respects and ligaments of government, and to erect a universal over-swaying power to themselves, which belongs only to us and not to them..." Charles believes that parliament sought to overthrow him and seize his powers and the powers of the monarch. He on the other hand thought that the powers were supposed to be rightfully the monarchs and were not to be shared. The breakdown between them is heavily due to misunderstandings in power and jurisdiction and the reluctance of each side to share power with the other. Parliament were treading on the ground of power which was rightfully the kings and the king was trying to take some of parliaments jurisdiction into his own hands. This combined misunderstanding of power was the catalyst to the breakdown of trust between the two and the subsequent Civil War, which followed. Nigel Caunt 09/05/2007 2 Nigel Caunt 09/05/2007 ...read more.