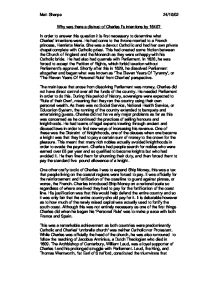 Why was there a distrust of Charles I's intentions by 1640?

Why was there a distrust of Charles I's intentions by 1640? In order to answer this question it is first necessary to determine what Charles' intentions were. He had come to the throne married to a French princess, Henrietta Maria. She was a devout Catholic and had her own private chapel complete with Catholic priest. This had created some friction between the Church of England and the Monarch as they were unhappy with his Catholic bride. He had also had quarrels with Parliament. In 1628, he was forced to accept the Petition of Rights, which forbid taxation without Parliament's approval. Shortly after this in 1629, he dissolved Parliament altogether and began what was known as 'The Eleven Years Of Tyranny', or 'The Eleven Years Of Personal Rule' from Charles' perspective. The main issue that arose from dissolving Parliament was money, Charles did not have direct control over all the funds of the country. He needed Parliament in order to do this. During this period of history, sovereigns were expected to 'Rule of their Own', meaning that they ran the country using their own personal wealth. ...read more.

This was a remarkable achievement as both countries were predominantly Catholic and Charles' 'umbrella church' was neither Catholic nor Protestant. While Charles was officially the head of the church, he was also rumoured to follow the teaching of Jacobus Arminius, a Dutch Theologian who died in 1609. The Archbishop of Canterbury, William Laud, was a loyal supporter of Charles I and his prolonged struggle with Parliament. Laud, the King, and Thomas Wentworth, 1st Earl of Strafford, constituted the triumvirate that attempted to achieve absolutism for the Crown in political and ecclesiastical matters. Charles wanted to expand his religious and political influence into Scotland. In 1637 when Laud, with the support of Charles, attempted to introduce the Anglican liturgy in Scotland, a riot took place in St Giles Cathedral in Edinburgh. The revolt spread and led to the formation of the Solemn League and Covenant of 1638 and the First Bishop's War in 1639. This was a large problem for Charles. His personal rule was fine until a war broke out because he had no need of extraordinary funds, but that is exactly what was happening in Scotland. ...read more.

Certainly Parliament were unsure of Charles and his intentions. They knew he wanted money and did not want them to be involved in the country but they did not know for certain the lengths he would go to in order to achieve this. France and Spain had to have known that Charles was not making peace for the sake of it but mainly because he could not afford to go to war. They also knew that if push came to shove, Charles could recall the Parliament and fund a full scale war, regardless of how much he didn't want to. The Scot's also had been affected by the eleven year of Personal Rule, Charles had tried to introduce Arminianism to replace their Presbyterian clergy which had resulted in two Bishop's wars which also resulted in Charles being forced to recall Parliament. The other un-discussed party is Charles himself, was he sure of what he was doing and why? Did he have a clear and concise plan? and if so what went wrong? Was Charles being Proactive or Reactive? Did he manipulate events and people in order to serve his own means or did he simply go along with everyone else and take the easy route? Matt Sharpe 24/10/02 ...read more.