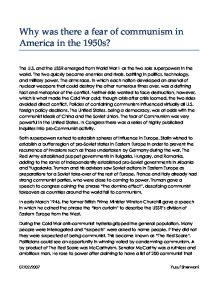 Why was there a fear of communism in America in the 1950s? The U.S. and the USSR emerged from World War II as the two sole superpowers in the world. The two quickly became enemies and rivals, battling in politics, technology, and military power. The arms race, in which each nation developed an arsenal of nuclear weapons that could destroy the other numerous times over, was a defining fact and metaphor of the conflict. Neither side wanted to face destruction, however, which is what made the Cold War cold: though crisis after crisis loomed, the two sides avoided direct conflict. Policies of containing communism influenced virtually all U.S. foreign policy decisions. The United States, being a democracy, was at odds with the communist ideals of China and the Soviet Union. The fear of Communism was very powerful in the United States. In Congress there was a series of highly publicized inquiries into pro-Communist activity. Both superpowers rushed to establish spheres of influence in Europe. ...read more.

This became known as "The Red Scare". Politicians could see an opportunity in winning voted by condemning communism. A by product of The Red Scare was McCarthyism. Senator McCarthy was a ruthless and ambitious man. He rose to power after claiming to have a list of 200 communist that had infiltrated the government. The claims turned out to "be a fraud and a hoax", however he accused anybody who attacked his policies as being a communist and was well known for turning his committee into a weapon to increase his personal power and terrify others. In 1954 he turned his attacks on the army. By this time, his claims seemed ridiculous and he was publicly humiliated by the army lawyer. As a result McCarthy lost all his public credibility and died three years later, in 1957. France, Britain, and the United States gradually united their three zones of occupation within Germany and in 1948 announced their intention to create a West German Republic. ...read more.

The battle for nuclear dominance was characteristic of the Cold War, in which few battles were ever waged face to face. In September 1949, the USSR detonated its first atomic bomb. This development, combined with the establishment of a communist regime in China, inspired a new and fiercer anticommunism in the U.S. government, expressed in its decision to more than triple the defense budget and to mount a furious campaign to develop a hydrogen bomb. The drive for the hydrogen bomb succeeded in the November 1952 detonation of an H-bomb in the Marshall Islands. But the American advantage was short-lived. In July 1953, the Russians detonated their own H-bomb. In addition to this, a by-product of the Cold War was the Korean War. When Communist North Korea invaded South Korea in 1950, President Truman sent the American military into action. The Korean War ended three bloody years later in a truce that left the border between North and South Korea intact, the infamous 38th parallel. The U.S. suffered 157,530 casualties and South Korea sustained over 1.3 million casualties. Estimated Communist casualties were 2 million. ?? ?? ?? ?? 07/02/2007 Yusuf Sherwani ...read more.