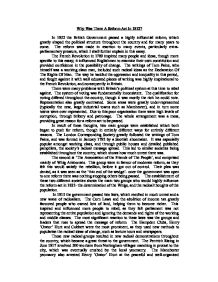 Why Was There A Reform Act In 1832? In 1832 the British Government passed a highly influential reform, which greatly shaped the political structure throughout the country and for many years to come. The reform was made in reaction to many events, particularly extra-parliamentary pressure, which I shall further explain in this essay. The French Revolution in 1789 inspired many people and ideas, though more specific to this essay; it influenced Englishmen to examine their own constitution and provided confidence in the possibility of change. The writings of Tom Paine, who himself was a working class man, included such radical ideas as the Declaration Of The Rights Of Man. The way he tackled the oppression and inequality in this period, and fought against it with well educated pieces of writing was highly inspirational to the French Revolution, and consequently in Britain. There were many problems with Britain's political system at this time to rebel against. The system of voting was fundamentally inconsistent. The qualification for voting differed throughout the country, though it was mostly the rich he could vote. Representation also greatly contrasted. ...read more.

The most significant reaction to these laws was the groups and leaders that rose to spread the message of reform. The Hampden Clubs, Henry 'Orator' Hunt and Cobbett were the most prominent, as they used new methods to popularise the radical ideas of change, such as lecture tours and newspapers. These new radical groups resulted in new radical demonstrations throughout the country, which became a great threat to the government. The Pentrich Rising in June 1817 involved 500 workers from Nottingham villages marching in protest to the city, which was eventually crushed by the local yeomanry. The Manchester yeomanry also arrested Henry 'Orator' Hunt at the peaceful and well-organised Peterloo meeting in 1819, due to authorities suspicions that it was the beginning of a revolt after witnessing drilling on the moors. This shows how these groups and meetings were starting to worry the government. This event led to many injuries, though gained national coverage in newspapers, and led to more public demonstrations taking place. The unsuccessful 'Cato Street Conspiracy', which planned to assassinate the cabinet, also shows the radical and negative attitude of people in this period. ...read more.

It was an ideal opportunity to push for reform, and the pressure for change greatly increased by the 'swing riots', demonstrations, rallies and petitions. These events made the politicians in Westminster increasingly nervous. The fact that the middle and working classes had united in political unions provided a strong threat to the government. The establishment of the Melbourne courts in response to the swing riots also represented how serious the situation was becoming. Agricultural workers, who typically did not get involved in political matters and were easy to handle, were also rebelling. In July 1830 a rebellion in France against Charles X reminded the British government of the significant events of the French Revolution in 1789, and the Whig's decided that reform was the only way to avoid revolution. The Whig's determination to pass reform is a major reason why the change took place. The bill was passed June 1832 after it's third reading, and received Royal Assent. The Whig's struggled through a lot of political change and unrest to make this happen, and all though it did not please everyone, it answered the demands of the masses. In conclusion, there were two major reasons why the reform act was passed in 1832. The first is political changes; it was very important that the Whig's dominated over the Tories for any change ...read more.