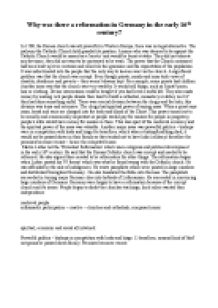 Why was there a reformation in Germany in the 16th century?

﻿Why was there a reformation in Germany in the early 16th century? In 1500, the Roman church was all powerful in Western Europe, there was no legal alternative. The jealousy the Catholic Church held guarded its position. Anyone who was deemed to be against the Catholic Church would be named as a 'heretic' and would be burnt at stake. They did not tolerate any deviance, they did not want to be portrayed to be weak. The power that the Church contained had been built up over centuries and relied on the ignorance and the superstition of the population. It was indoctrinated into the people that the only way to heaven was via the church. A significant problem was that the church was corrupt. Even though priests, monks and nuns took vows of chastity, obedience and poverty ? they weren't always kept. For example, some priests had children. Another issue was that the church was very wealthy. It would sell things, such as Saints' bones, hair or clothing. Divine intercession could be bought if you had lived a sinful life. ...read more.

Powerful politics ? bishops in competition with lords and kings. 1) benefices, unusual kind of thief not gonna be passed down family. Premises becomes vacant. One of the world?s leading medievalists explores medieval hearts and minds to find out what really motivated our ancestors. Examining power, beliefs, family and knowledge, this series looks at the similarities and differences to modern life. Why did people believe in demons? How quickly did children have to grow up? Did the concept of courtly love help or hinder women? We visit archaeological digs, historic monuments and scientific laboratories to discover the hopes, fears and passions of the medieval world. Power The traditional model of medieval society divided people into ?those who pray, those who fight and those who work?, assuming that most people were priests, knights or peasants. Examining paintings and illuminated manuscripts, we uncover the more complex reality, consider the impact of urban revolts and look at the groups who did not fit into the simplistic picture, including townsmen, traders and women. The role of kings and queens was also more complex. ...read more.

Each invention made possible further innovations; mill power was used to hammer metal and produce paper and reading glasses doubled the working lives of specialist craftsmen. Newly built ships enabled an era of exploration. Missionaries, envoys and merchants travelled from Western Europe into Asia, dispelling myths of cannibals and dog-headed creatures. These early voyages led eventually to Columbus?s journey to America and modern colonialism 3 Now it is time for your third task to pull everything you have been listening to together. Answer the following question in 3 paragraphs. ?Why was there a Reformation in Germany in the early 16th century?? Limit your answer to 700 words in total. Paragraph 1 Explain the problems with the Roman Catholic Church that existed by the 16th century. Paragraph 2 Explain the particular situation in Germany that made her so happy to have a Reformation. Paragraph 3 Explain how the medieval mind worked.Cahotlic church 1. 2. spiritial power becomes important ? socially + ecomically and political oneqences. No longer dependant on clergy on masses or buying indlugences which funds the papency ? its free 3. political power ? clergy ? bishops. All priets, supervie other priest in other churces, hold a benefice (church thief, king grants land to a noble man in return for military service', ...read more.