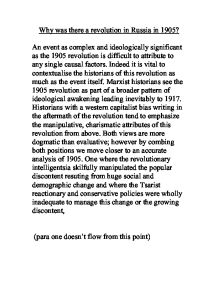 Why was there a revolution in Russia in 1905?

Why was there a revolution in Russia in 1905? An event as complex and ideologically significant as the 1905 revolution is difficult to attribute to any single causal factors. Indeed it is vital to contextualise the historians of this revolution as much as the event itself. Marxist historians see the 1905 revolution as part of a broader pattern of ideological awakening leading inevitably to 1917. Historians with a western capitalist bias writing in the aftermath of the revolution tend to emphasize the manipulative, charismatic attributes of this revolution from above. Both views are more dogmatic than evaluative; however by combing both positions we move closer to an accurate analysis of 1905. One where the revolutionary intelligentsia skilfully manipulated the popular discontent resuting from huge social and demographic change and where the Tsarist reactionary and conservative policies were wholly inadequate to manage this change or the growing discontent, (para one doesn't flow from this point) This is exemplified by the 'Bloody Sunday' massacre on the 22nd of January 1905. As well as a 'tipping point' the massacre should be viewed as a metaphor for the inability of Nicholas' regime to deal with the genuine grievance of the Russian people, whilst demonstrating the opportunism of the intelligentsia in exploiting this. A group of peaceful petitioners and their families were marching to the St. ...read more.

Nicholas emphasised Russia status as a "great power" and focused upon industrialisation without making the societal changes that would allow the distribution of its profits within Russia. It was a misguided attempt at applying 20th century fiscal policy, to a feudal governmental structure. The seriousness of this issue in causing the revolution can be seen in that the Zemstvo nobility, as well as professionals from the upper and middle classes began to rally behind the illegal liberal movement, defying the okhrana and show a significant difference in the social unrest seen by any previous Tsar. Clearly this best explains why there was a revolution in 1905, and why there was opposition not just from the workers but from a range of individuals desperate enough to find the ideological leaders more promising for personal prosperity than the Tsar. Yet again in 1904 Nicholas clung so vehemently to the traditional autocratic values of Tsardom, within a context where such ideas were not only impractical but destructive to the very structures he sought to protect. Nowhere is this mistake more clearly demonstrated than the Russo-Japanese war. Russia's expansionist desires in the east, combined with a military desire for an ice-free port led to the provoking of Japan, who also wanted ownership of Korean Port Arthur (but were willing to negotiate), into mounting an attack, and starting off the Russo-Japanese war. ...read more.

However even with Nicholas's behaviour this seems unlikely as industrialisation and the emancipation of the surfs changed the structure of Russian society without changing the way it was governed which is clearly very important in answering why there was a revolution in Russia in 1905, and more significant than the Russo-Japanese war which in a different societal structure may have received the kind of patriotic support Nicholas was hoping to achieve. Clearly the role of the intelligentsia in exploiting this popular resentment is one of the best historical explanations for the 1905 revolution. Overall it seems in answering the question why was there a revolution in 1905, whilst the short term causes are important, the long term causes that created social unrest are the most significant and relevant for answering the question. Without the build up of effects from long term causes, short term reasons wouldn't have been so significant for example the police wouldn't have overreacted so much on Bloody Sunday if it weren't for the heightened atmosphere of revolution that came from the spread of liberalist or otherwise ideology. The reason there was a revolution in Russia in 1905 was the level of social unhappiness and resentment that came from years of autocratic rule, and terrible living conditions for a large sector of the population, combined with the skills of the intelligentsia to draw upon resentment and expose the reactionary nature of autocracy, which gave Nicholas' enemies a platform on which to plan revolution. ?? ?? ?? ?? ...read more.