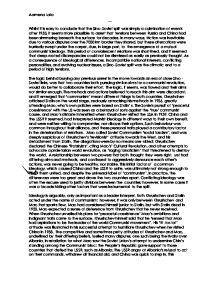 Why was there a Sino-Soviet split by the late 1960s?

Why was there a Sino-Soviet split by the late 1960's? Whilst it is easy to conclude that the Sino-Soviet split was simply a culmination of events after 1953, it seems more plausible to assert that tensions between Russia and China had been simmering beneath the surface for decades. In many ways, friction was inevitable due to various disputes over the 7000 km border they shared, but these altercations were hurriedly swept under the carpet, due, in large part, to the emergence of a mutual communist ideology. This period of convalescent relations was short-lived, and it seemed that deep-rooted discrepancies could not be dismissed as easily as previously thought. As a consequence of ideological differences, incompatible national interests, conflicting personalities, and evolving nuclear issues, a Sino-Soviet split was the climatic end to a period of high tensions. The logic behind burying any previous unrest in the move towards an era of close Sino-Soviet links, was that two countries both pursuing similar aims for a communist revolution, would do better to collaborate their effort. The logic, it seems, was flawed and their aims not similar enough. The methods and actions believed to reach this aim were discordant, and it emerged that 'communism' meant different things to both countries. Khrushchev criticised Stalin on the world stage, zealously ostracising his methods in 1956, greatly offending Mao, who's own policies were based on Stalin's. The Soviets pursuit of 'peaceful coexistence' with the US was seen as a betrayal of sorts against the 'true' communist cause, and Mao's distaste intensified when Khrushchev visited the USA in 1959. ...read more.

There was no thaw in the tense relations between China and the USSR when Brezhnev took to power and consequently ideology obviously played a larger role in breaking down the bond. Some of the historical tensions between China and the USSR prior to their alliance in 1953, continued on, to feed into the Sino-Soviet split. Before communist ideology gripped China, and before Mao came to power, the USSR and China were locked in a battle over border disputes that neither side could ignore. These disagreements continued during their alliance, and the number of Soviet army divisions along the Chinese border doubled between 1967 and 1970. Instead of being the cause of further altercations, border disputes were often the manifestation of divisions, such as that along the Ussuri River in 1969. With 7000 km of shared borders, there was on-going opportunity for conflicting national interests. At the heart of the split was China's struggle to become a world power and the Soviet Union's determination to prevent it. The Soviets claimed that they 'want[ed] socialism, but we [USSR] want to win it through class struggle, not by unleashing a world thermonuclear war' whereas the Chinese had no qualms about starting a war in order to achieve their goals. The trenchant denial to share nuclear technology, and thus thwart Chinese national ambitions was instrumental to the eventual split. What China saw as necessary to its national interests, the Soviets saw as potential threat to their own power. ...read more.

Border disputes and other similar tensions, were ostensibly the materialization of dispute over national interests, but at the core they provided an outlet for ideological feuds, without the escalation into war. During the course of their relationship, China and the Soviet Union skirted around the fact that whilst they both claimed to advocate communism, they had different ideas of how to pursue that dream. The cherry on the cake was the acquisition of nuclear arms, thrusting the PRC on the world stage. The reason the Soviets had wanted to prevent this so very much is because it would buy China the power to influence, whereas before the USSR had very much dominated the relationship. The personality of the leaders whilst played an important role initially, as Mao and Khrushchev never saw eye-to-eye, the appointment of Brezhnev indicated that personality change would not change the dynamic between the Chinese and the Soviets. Nevertheless, the leaders were imperative in the early stages of the alliance, as ideology and national aims in my opinion were formed largely as a result of the leaders' views. Hence ideology was the fundamental reason for the split in Sino-Soviet relations, yet these principles were slowly eroded and substituted by national interests as interpreted by the leaders. These differing idyllic views of the future of each country were the reason for increased tensions, and with the China's emergence as a superpower, and the removal of a mutual Western enemy, in place of each other, a split in relations was the inevitable result. ?? ?? ?? ?? Aamena Lala ...read more.