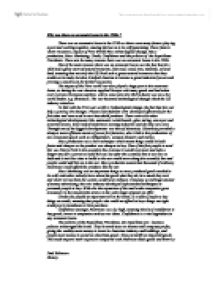 Mass production was a new technique which meant things could be built faster and cheaper so the product was cheaper to buy. One of the first people to used this was Henry Ford in the assembly line, become it would cost more and take a longer time for a person to build the car, but after the assembly line it cost less to built and it took less time to build as the car would move along the assembly line and people would add bits on to the car. Mass production meant that thousand of ordinary Americans could afford the products like the car. Mass Marketing was an important things as mass produced goods needed to be sold, and unless nobody know about the good what they do, how much they cost and where to buy them the system would have collapse. ...read more.

They didn't interfere in business or put any controls on financial institution. The economic boom in the 1920s was helped by many factors like that American had a huge number of natural resources that they come out of the first world war being the world biggest supplier and taking business away from European companies, and along with the war there where technological changes which American was the first to jump on, they use and become the first companies in mass production and the assembly line, mass marketing was used to sell the goods, credit was used so people who could not bug the goods out right there and then could buy then on hire purchase, the fact Americans had the confidence to buy and invest and that the Republican Presidents had laissez faire approach to business and other issues. The economic boomed in the 1920 due to all of these but all was not good in there economic. Paul Robinson History ...read more.