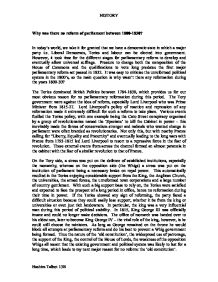 Why was there no reform of parliament between 1800-1830? In today's world, we take it for granted that we have a democratic state in which a major party i.e. Liberal Democrats, Tories and labour can be elected into government. However, it took time for the different stages for parliamentary reform to develop and eventually allow universal suffrage. Pressure to change both the composition of the House of Commons and the qualifications to vote long predates the first major parliamentary reform act passed in 1832. It was easy to criticise the unreformed political system in the 1800's, so the main question is why wasn't there any reformation during the years 1800-30? The Tories dominated British Politics between 1784-1830, which provides us for our most obvious reason for no parliamentary reformation during this period. The Tory government were against the idea of reform, especially Lord Liverpool who was Prime Minister from 1815-27. Lord Liverpool's policy of reaction and repression of any reformation made it extremely difficult for such a reform to take place. ...read more.

As long as George remained on the throne he would block all attempts at parliamentary reform and do his best to prevent a Whig government being formed. Thus the nature of the 'old constitution', the widespread use of patronage, the support of the King, the control of the House of Lords, the weakness of the opposition Whigs all meant that the existing government and political system was likely to last for a long time, which leads to my next major reason for no reform: the 'old constitution'. The main problem from the artisans' point of view was that the old constitution in England and Wales was not very representative. Only 10-12% of adult males qualified for the vote, with qualifications such as 40 shillings worth of land allowed a person to vote. This resulted in a small electorate, consisting of mainly rich landowners who exploited the artisans and working class. Aristocratic landowners remained very strong in the political scene and it was only possible to stand for election in a borough if you were related to a peer, most of them sons of aristocrats. ...read more.

In conclusion, there is a culmination of different reasons why there was no reform between 1800-30. As historians, we have the advantage of hindsight and we know that the Great Reform Act in 1832 was eventually going to pass and in the long term lead to universal suffrage. But during these years of Lord Liverpool's cabinet, it must have seemed impossible for reformation in the sight of the working class - after the Peterloo massacre, the government was stronger than ever, with such radicals frowned upon and called revolutionaries. The army, courts and law were all against the radicals, which automatically made it extremely difficult for reformation to take place during Lord Liverpool's time in power. It wasn't until Lord Liverpool's death that the pace for change began to quicken. Change is always difficult for the affluent in society, and with the Tories enjoying maximum support, it was hard for them to adjust to the idea of reform. Instead, the government hoped that the repressive measures they took would frighten the majority into submission. As the Historian, Eric Evans says: "The government, well-provided with both spies and agents provocateurs, never lost control of events in this period". HISTORY Hashim Talbot 13B ...read more.