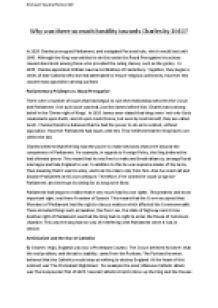 Why was there so much hostility towards Charles by 1640?

﻿Nishaant KaushalHistory12V Why was there so much hostility towards Charles by 1640? In 1629 Charles prorogued Parliament, and instigated Personal rule, which would last until 1640. Although the King was entitled to do this under the Royal Prerogative his actions caused discontent among those who provided the ruling classes, such as the gentry. In 1633, Charles appointed William Laud as Archbishop of Canterbury. Together, they began a series of anti-Calvinist reforms that attempted to ensure religious uniformity, however this caused mass opposition among puritans. Parliamentary Privileges vs. Royal Prerogative There were a number of issues that had begun to ruin the relationship between the Crown and Parliament. One such issue was that, just like James before him, Charles had a strong belief in the ?Divine right of Kings?. In 1610 James even stated that kings were ?not only Gods Lieutenants upon Earth, and sit upon Gods throne, but even by God himself, they are called Gods?. Charles therefore believed that he had the power to do as he wished, without opposition. ...read more.

However in between the conflict between Catholicism and Puritanism there was another struggle, that of Arminianism and Purism. The Arminians believed in more Catholic ideas, such as the use of ritual and Ceremony in Church. The puritans however were extreme Protestants, and wanted simple and bare churches. The Crown favoured Arminianism; however it could not openly admit its catholic persuasion without rebellion from the Puritans. So instead, Charles used William Laud to enforce Uniformity, and bring the conflicting ideas into one religion. However Uniformity still incurred the wrath of many Puritans. For instance one rule of Uniformity was that, ?Priests to wear vestments, to bow at the name of Jesus, and to light candles at the altar?. This induced extreme opposition from Puritans. Fear of Absolutism Parliament began to fear that Charles might impose Absolutism on the country. Charles had formidable enforcement powers and used these to great extent to find a way around Parliaments laws, so that he could be independent of Parliament. For instance, the King appointed all judges. ...read more.

They introduced the idea of ?Thorough?, which would hold officials accountable for their oversights and mistakes. An example of this in use was the publication of the ?Book of Orders? in 1631. This gave instructions to Sheriffs and clarified their responsibilities and made them accountable to the Privy Council. It meant that the King would be served by more responsible, accountable subjects, and would be in harmony with his subjects. In conclusion, there was much hostility towards Charles in 1640. His personal rule caused many to oppose him and his ideals. Among this was the provocation of the Puritans. His refusal to appease them, and instead appoint Archbishop Laud who imposed Arminian ideals, only served to anger them, and lead to greater hostility. Also Charles? attitude towards Parliament, and his belief that it was his divine right to rule, led to many enemies within, and outside of the Parliament, mainly among the gentry, as they believed that the king had to ac within the law. Lastly, his enforcing of absolutism meant that many officials began to fear his rule, and to react negatively toward Charles. Therefore it was expected that there was lots much hostility towards Charles in 1640. ...read more.