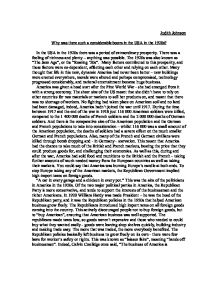 Why was there such a considerable boom in the USA in the 1920s?

Judith Johnson Why was there such a considerable boom in the USA in the 1920s? In the USA in the 1920s there was a period of extraordinary prosperity. There was a feeling of richness and plenty - anything was possible. The 1920s was also known as "The Jazz Age", or the "Roaring '20s". Many factors contributed to this prosperity, and these factors were co-dependent, affecting each other and relying on each other. Many thought that life in this new, dynamic America had never been better - new buildings were erected everywhere, morals were altered and perhaps compromised, technology progressed considerably, and national entertainment became huge business. America was given a head start after the First World War - she had emerged from it with a strong economy. The sheer size of the US meant that she didn't have to rely on other countries for raw materials or markets to sell her products on, and meant that there was no shortage of workers. No fighting had taken place on American soil and no land had been damaged, indeed, America hadn't joined the war until 1917. During the time between 1917 and the end of the war in 1918 just 116 000 American soldiers were killed, compared to the 1 400 000 deaths of French soldiers and the 2 000 000 deaths of German soldiers. ...read more.

The assembly line was born. This production line and conveyer belt idea put the work onto machines. No skilled workers were needed - just people to do one or two very simple jobs on the product in progress as it travelled past them. Goods that had previously taken skilled men weeks to finish were being made by a series of untrained men and being finished quickly, making the products increasingly cheaper and more and more easily available to the public. One of the industries most benefited by the new methods of production was the huge industry of cars. The biggest producer of cars was Henry Ford. By using an assembly line an assembly line that he introduced in 1913, he needed fewer workers, which cut the cost of wages. To cut production costs further, he standardised cars - only one colour and one engine size were available. It was the car industry that - more than any other industry, helped make America prosperous in the 1920s. And the car industry profited America's other industries as well. To produce the cars, 20% of America's steel, 80% of her rubber, 75% of her plate glass and 65% of her leather were used, creating more jobs in these industries. As a result of the amount of cars on the roads, Seven billion gallons of petrol was consumed a year - benefiting the Texan oil producers. ...read more.