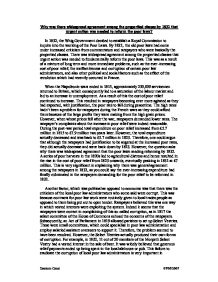 Why was there widespread agreement among the propertied classes by 1832 that urgent action was needed to reform the poor laws?

Why was there widespread agreement among the propertied classes by 1832 that urgent action was needed to reform the poor laws? In 1832, the Whig Government decided to establish a Royal Commission to inquire into the working of the Poor Laws. By 1832, the old poor laws had come under increased criticism from commentators and ratepayers who were basically the propertied classes. There was widespread agreement among the propertied classes that urgent action was needed to fundamentally reform the poor laws. This was as a result of a mixture of long term and more immediate problems, such as the ever-increasing cost of poor relief, the ineffectiveness and corruption of certain poor law administrators, and also other political and social factors such as the effect of the revolution which had recently occurred in France. When the Napoleonic wars ended in 1815, approximately 250,000 servicemen returned to Britain, which consequently led to a saturation of the labour market and led to an increase in unemployment. As a result of this the cost of poor relief continued to increase. ...read more.

Indeed it seems that the ratepayers were correct in complaining of this so-called corruption, as in 1817 the select committee of the House of Commons echoed the concerns of the ratepayers. Subsequently, an Act of Parliament in 1819 allowed parishes to set up Select Vestries. These were small committees, which could specialise in poor law administration and employ salaried assistant overseers to support it. Therefore, the problem seemed to have been resolved. However, the Select Vestries actually produced their own forms of corruption. For example, in 1832, 11 out of 20 members of the Morpeth Select Vestry had a vested interest in the sale of beer. It was widely believed that generous relief payments ended up being spent in the local alehouse or pub. This failure to eradicate the corruption of local poor law administrators is very important in explaining why reform of the poor laws was so popular by 1832. The ratepayers were clearly becoming increasingly fed up and angry with the failure to sort the problem out and hence it is likely that this will have almost certainly led to them demanding for more fundamental reform. ...read more.

The fact that poor relief expenditure had increased during peacetime is undoubtedly very important in explaining why the poor laws had attracted so much criticism. However, the fact that expenditure was at its highest in 1831 is clearly a very important long term factor and the most important factor in explaining why there was widespread agreement among the propertied classes by 1832. Also, the census of 1821 showing a population increase justified Malthus' fears that the Speenhamland system was having a bad affect on the general attitude of the poor is also important in explaining why there was widespread agreement. The poor harvests in the 1820s is an important short-term factors as they effectively caused the rise in the cost of the poor relief. The failure to find an effective solution to the corruption of local poor law administrators clearly angered ratepayers and is very likely to have opened the ratepayers eyes, and led to them insisting that clearly more radical reform was necessary if the poor laws were to be more effective. ?? ?? ?? ?? Dominic Court 07/05/2007 ...read more.