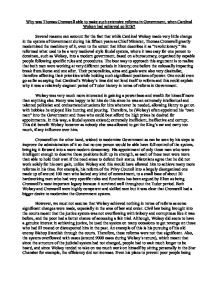 Why was Thomas Cromwell able to make such extensive reforms in Government, when Cardinal Wolsey had achieved so little?

Why was Thomas Cromwell able to make such extensive reforms in Government, when Cardinal Wolsey had achieved so little? Several reasons can account for the fact that while Cardinal Wolsey made very little change in the system of Government during his fifteen years as Chief Minister, Thomas Cromwell greatly modernized the machinery of it, even to the extent that Elton describes it as "revolutionary." He reformed what used to be a very medieval style feudal system, where it was easy for one person to dominate, such as Wolsey, into a modern government, based on a bureaucracy, organized by capable people following specific rules and procedures. The best way to approach this argument is to realize that both men were working at very different periods in history; one before the colossally impacting break from Rome and one after. Their personalities, aims and goals were also very dissimilar, therefore affecting their priorities while holding such significant positions of power. One could even go as far as saying that Cardinal's Wolsey's time did not lend itself to reform and this could explain why it was a relatively stagnant period of Tudor history in terms of reform in Government. Wolsey was very much more interested in gaining a power base and wealth for himself more than anything else. Henry was happy to let him do this since he was an extremely intellectual and talented politician and orchestrated situations for him whenever he needed, allowing Henry to get on with hobbies he enjoyed like hunting and jousting. ...read more.

We must realize however, during Cardinal Wolsey's time that one of the few things that he and the nobility agreed on was the fact that Government should be small and not trespass too much on other people's lives. The classic feudal view was that the King and his advisers should concentrate on law and war rather than get too involved in domestic affairs, which is exactly what was done before Cromwell's arrival. Randall sums this up by saying that "there was little contemporary disappointment that Wolsey did not do more." Therefore, Wolsey cannot be seriously blamed for leaving the Government when he died as a very much medieval one. Before the break from Rome happened, there was no burning need to reform how the country was run in the localities and make sure the King's wishes were being upheld as opposed to the situation Cromwell faced in 1533. We can see this through the way that during Wolsey's fifteen years of power, Parliament was called only a few times, because it was not necessary. When it was called, for example in 1523, it was only to raise a tax for the pending war with France rather than to represent the people and help govern the country. This can be compared to Cromwell's much more frequent use of the institution to help the Reformation seem less dictatorial to the people. ...read more.

into instability otherwise without his use of Parliament and Courts in order to improve finances and administration (though the Reformation was a very piecemeal one). We cannot strongly argue that whether Wolsey or Cromwell was better than the other, not only because they were working at different periods of time, but also because even Cromwell's reforms were not long lasting. Since they required his very personal network of patronage and skill, many of the Courts that he created decayed after his death and Smith concludes that it is very dangerous to argue that Cromwell created some kind of Revolution. It was more the concepts he created that outlived him, such as the greater power and influence given to Parliament, the secularization of Government and uniform law. To answer the question of why Cromwell was able to make such extensive reforms when Wolsey did no such thing, I would say that Cromwell's reforms must not be exaggerated and Wolsey's must not be underestimated. Both men were very personal to Henry and served him to the best of their ability at the time, in their own circumstances. Particularly the difference in situation regarding the break from Rome would have led Cromwell to make sure that the King's unit ran throughout the country, whereas Wolsey didn't need to. It can be mentioned here, that Wolsey was behaving like a typical medieval politician, working for his own wealth and gain, and concentrating much more on foreign policy. ...read more.