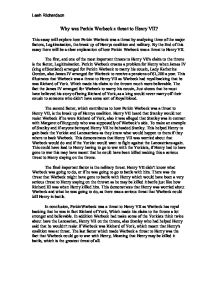 Why was Warbeck a threat to Henry VII?

Henry VII heard that Stanley would not resist Warbeck if he were Richard of York, also it was alleged that Stanley was in contact with Margaret of Burgundy who was supposedly of Warbeck's side. To make an example of Stanley and if anyone betrayed Henry VII he beheaded Stanley. This helped Henry to gain back the Yorkist and Lancastrians as they knew what would happen to them if they where to back Warbeck. This demonstrates that Henry VII was worried about that Warbeck would do and if the Yorkist would want to fight against the Lancastrians again. This could have lead to Henry having to go to war with the Yorkists, if Henry had to have gone to war this may have meant that he could have been killed making this a serious threat to Henry staying on the throne. ...read more.

This demonstrates that Henry was worried about Warbeck and what he was going to do, as there was a serious threat that Warbeck could kill Henry in battle. In conclusion, PerkinWarbeck was a threat to Henry VII as Warbeck has royal backing that he was in fact Richard of York, Which made his claim to the throne a lot stronger and believable. In addition Warbeck had make some of the Yorkists think twice about have the Lancastian, Henry VII on the throne, also Stanley who had helped Henry said that he wouldn't resist if Warbeck was Richard of York, which meant that Henry's coalition was at threat. The last factor which made Warbeck a threat to Henry was the fact that Warbeck could go to war with Henry, Meaning that Henry may be killed it battle, which is the greatest threat of all. Leah Richardson ...read more.