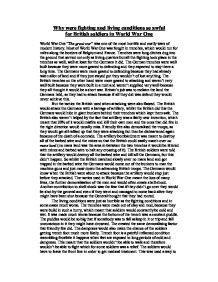 Why were fighting and living conditions so awful for British soldiers in World War One World War One "The great war" was one of the most horrific and costly wars of modern history. Most of World War One was fought in trenches, which would run for miles along the borders of Belgium and France. Trenches were long ditches dug into the ground that served not only as living quarters but all the fighting took place in the trenches as well, well at least for the Germans it did. The German trenches were well built because they were more geared to defending and they expected to stay there a long time. The Germans were more geared to defending because they had already taken allot of land and if they just stayed put they wouldn't of lost anything. The British trenches on the other hand were more geared to attacking and weren't very well built because they were built in a rush and weren't supplied very well because they all thought it would be a short war. ...read more.

mans land was the area in-between the two trenches it would be littered with mines and barbed wire to halt any crossing of it). The British soldiers were told that the artillery would destroy all the barbed wire and kill all the Germans, but this didn't happen. So whilst the British marched slowly over no mans land and got trapped in the barbed wire the Germans would come out of the bunkers to man the machine guns and just mow down the advancing British troops. The Germans would know when the British were about to attack because the artillery would stop just before they attacked. The tactics used in World War One meant the loss of many lives, the further demoralisation of the men and would often create shell shock. Another contribution to shell shock was the fear that if they didn't go over they would be shot by the general and even if they went and managed to come back alive they might have been shot because the General thought that they had routed. ...read more.

The soldiers would have to leave the front line in order to get medical treatment. This was used a way to relax, socialize and cure boredom. Boredom was one of the less painful but still awful living conditions for British soldiers. The soldiers would get very bored, as actual fighting was very scarce. Some men would get so bored that the attraction of looking over the top of the trench at the enemy trench was often to tempting and they would get picked off by enemy snipers. The chance to get medical treatment was often a great chance for soldiers to relax and catch up on the news back home which helped to restore morale. There were other things that required medical attention for example, trench fever. Trench fever is characterized by a sudden onset of high fever, headaches, sore muscles, and outbreaks of skin lesions. Unfortunately trench fever wasn't recognized as a medical condition, so the only way to lessen the discomfort was to regularly wash your hair but this was hard considering the conditions. 848 words. ...read more.