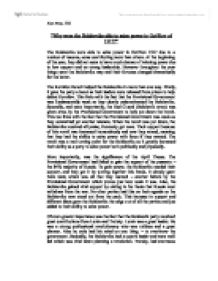 &quot;Why were the Bolsheviks able to seize power in Oct/Nov of 1917

"Why were the Bolsheviks able to seize power in Oct/Nov of 1917?" The Bolsheviks were able to seize power in Oct/Nov 1917 due to a number of reasons, some contributing more than others. At the beginning of the year, they did not seem to have much chance of winning power due to low support and no strong leadership. However throughout the year things went the Bolsheviks way and their fortunes changed dramatically for the better. The Kornilov Revolt helped the Bolsheviks in more than one way. Firstly, it gave the party a boost as their leaders were released from prison to help defeat Kornilov. This links with the fact that the Provisional Government was fundamentally weak as they clearly underestimated the Bolsheviks. Secondly, and most importantly, the Red Guard (Bolshevik army) was given arms by the Provisional Government to help put down the revolt. ...read more.

Also, the Bolsheviks gained vital support by stating in the thesis that Russia must withdraw from the war. No other parties had this on their agenda so the Bolsheviks now stood out from the pack. This increase in support and different ideas gave the Bolsheviks the edge out of all the parties and just added to their ability to seize power. Of even greater importance was the fact that the Bolshevik party received great contributions from Lenin and Trotsky. Lenin was a great leader. He was a strong professional revolutionary who was ruthless and a great planner. Also he only had his mind on one thing - to overthrow the government. Basically, the Bolsheviks had a superb leader and were well led which was vital when planning a revolution. Trotsky, had enormous power as he became chairman of the Petrograd Soviet in September 1917. ...read more.

The Provisional Government was not at all legitimate as the members, including Kerensky, were self-elected. Moreover, peasant's problems were not addressed therefore making them angry, and the nationalities issue was also not addressed which made different states (for example Poland) want to leave the country to form on their own. This caused unnecessary chaos in a country that was already on the edge. The weaknesses of the government were the major cause of the Bolsheviks seizure of power because the Russian people had a simple of who should rule their country - the Provisional Government, or the Bolsheviks, and with the government being so weak people supported the Bolsheviks. This gave them the support, and as they already had the ability, the Bolsheviks overthrew the government in Oct/Nov 1917 quite easily and they proved to be a strong and well organised party with great influence over the incredibly large and powerful nation that was Russia. ?? ?? ?? ?? Alex Price, 11S ...read more.