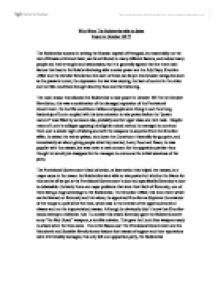 Why Were The Bolsheviks able to Seize Power in October 1917?

Why Were The Bolsheviks able to Seize Power in October 1917? The Bolsheviks success in seizing the Russian capital of Petrograd, but essentially not the rest of Russia until much later, can be attributed to many different factors, and indeed many people and their strengths and weaknesses, but it is generally agreed that the three main factors that lead to the Bolsheviks being able to seize power are the July Days, Kronilov Affair and the October Revolution but each of these can be put into broader categories such as the peasants unrest, the depression the war was causing, the lack of control in the cities and horrific conditions brought about by food and fuel rationing. The main reason that allowed the Bolsheviks to take power in October 1917 is the October Revolution, this was a combination of the damaged reputation of the Provisional Government, the horrific conditions millions of people were living in and the strong leadership of Lenin coupled with his determination to take power before the "power vacuum" was filled by someone else, probably another upper class and rich male. ...read more.

Although he obviously didn't know that Kronilov would attempt a militarian rule. To combat this attack Kerensky gave the Bolshevik secret army "the Red Guard" weapons, a terrible mistake. This gave the Lenin free weapons ready to attack when the time came. The entire fiasco cost The Provisional Government and the Menshevik and Socialist Revolutionary leaders lost masses of support and their reputations were irretrievably damaged, this only left one opposition party, the Bolsheviks The July Days was a major set back in the Bolsheviks attack on the Russian State, it was unorganised, badly co-ordinated, and showed to the supporters of the Provisional Government just how weak and unprepared the Bolsheviks were, despite the fact that the Bolsheviks didn't have any part to play in this attack, at least not from the top, several minor officials may have supported it, however Lenin was not even in the country and, Trotsky was sent out to retrieve Chekov so he was in some people's opinions actually against the revolutionaries, however he did come up with an inspirational speech showing how much he appreciated the efforts of these people. ...read more.

technically free they were forced to work land for the rich and could take little if any food or money from the profits of the work, this is why so many of them desired to be free and have their own land to work on, when this was granted by the Bolsheviks soldiers, already in disarray they fled the front line-killing officers as they went, and rushed home to get land. The war was a lost cause and when Lenin promised an end people loved the idea of Peace despite the fact it cost them almost 75% of their resources, the rich felt shameful. In conclusion one must narrow down the reasons, which allowed The Bolsheviks to take power in October 1917, and for many people it is the idea that the Kerensky and the Provisional Government's downfalls and lack of action, which can partly be blamed upon the lack of work done by the Tsar and the scandal, that surrounded him. This was as a result of the poor condition for the country and the workers who lived off the land, and the workers who ran the factories and so essentially the city ...read more.