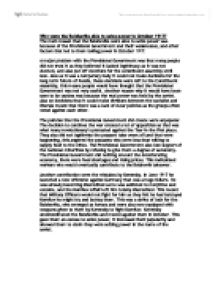 Why were the Bolsheviks able to seize power in October 1917? The main reason that the Bolsheviks were able to seize power was because of the Provisional Government and their weaknesses, and other factors that led to them taking power in October 1917. A major problem with the Provisional Government was that many people did not trust it as they believed it lacked legitimacy as it was not elected, and also put off elections for the constituent assembly until late. Also as it was a temporary body it could not make decisions for the long-term future of Russia, these decisions were left to the Constituent Assembly, this means people would have thought that the Provisional Government was not very useful. Another reason why it would have been seen to be useless was because the real power was held by the soviet. Also on decisions that it could make divisions between the socialist and liberals meant that there was a lack of clear policies as the groups often voted against each other. ...read more.

This meant that Military Officers would not fight for him as they felt he had betrayed Kornilov he might try and betray them. This was a strike of luck for the Bolsheviks, who emerged as heroes and were also now equipped with weapons given to them by Kerensky to fight Kornilov. Kerensky underestimated the Bolsheviks and moved against them in October. This gave them an excuse to seize power, it increased their popularity and allowed them to claim they were seizing power in the name of the soviet. The Bolsheviks became directly linked with opposition to the Provisional Government, the other socialist party's had been identified with the discredited Provisional Government. Their policies were what the workers and soldiers wanted, their slogan Peace, Bread and All Power to the Soviets was exactly what they wanted. Also the Bolsheviks were the only party that wanted to stop the war, this greatly increased their popularity. ...read more.

The military and Economic collapse created an opportunity which the Bolsheviks seized. The army was weak and many were starving. The radicalised workers who favoured soviet power supported the Bolsheviks as they were using the image of the soviets. Also as Kerensky underestimated them this meant the take over was relatively easy. The Bolsheviks had their greatest number of supporters around Petrograd and Moscow, particularly soldiers and sailors. This meant that the takeover of these key points would be made possible. Although only a small minority of the Petrograd garrison supported the Bolsheviks, the majority of the soldiers refused to oppose them and remained neutral - this guarantied the Bolsheviks success as they had less opposition from the army. All the factors play an important role - the problems of the Provisional Government, Bolshevik strengths, weaknesses of other parties and luck. However I think that the problems of the Provisional Government were the main reason the Bolsheviks could seize power, as they now only had to fight an enemy that was weak, both in supporters and in the military. ...read more.