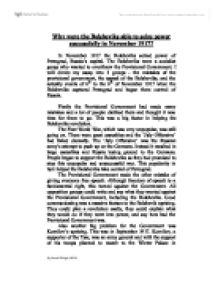 Why were the Bolsheviks able to seize power successfully in November 1917?

Why were the Bolsheviks able to seize power successfully in November 1917? In November 1917 the Bolsheviks seized power of Petrograd, Russia's capital. The Bolsheviks were a socialist group who wanted to overthrow the Provisional Government. I will divide my essay into 3 groups - the mistakes of the provisional government, the appeal of the Bolsheviks, and the actually events of 6th to the 8th of November 1917 when the Bolsheviks captured Petrograd and began there control of Russia. Firstly the Provisional Government had made many mistakes and a lot of people disliked them and thought it was time for them to go. This was a big factor in helping the Bolsheviks revolution. The First World War, which was very unpopular, was still going on. There were great casualties and the 'July Offensive' had failed dismally. The 'July Offensive' was the Russian army's attempt to push up on the Germans. Instead it resulted in large casualties and Russia losing ground to the Germans. People began to support the Bolsheviks as they had promised to stop this unpopular and unsuccessful war. ...read more.

They were supported by the soviets; these were like workers councils or unions. This meant that most of the working class supported the Bolsheviks. This was a big factor as Petrograd, Russia's capital and the Bolsheviks first target, was an industrial working class city. The Bolsheviks were lead be professional revolutionaries. This meant that people like Lenin had spent most of their life planning for this. They were very well organised and when it came to a revolution they could do it very effectively and quickly. Lenin, who was also known as 'The Pen' was very good at writing and getting his message to the people. He wrote his April Theses, which in it he writes 'Peace, Bread, land, all power to the soviets' Lenin This made the Bolsheviks very popular. Especially the 'Peace, bread, land' part as it was easy to say even if you couldn't read. The peasants (which made up over 70% of the population) also began to support the Bolsheviks. ...read more.