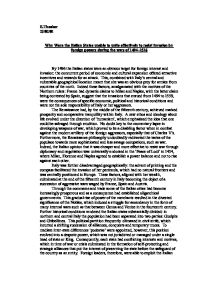 Why Were the Italian States unable to unite effectively to resist invasion by foreign powers during the wars of 1494-1516.

E.Theaker 23/02/01 Why Were the Italian States unable to unite effectively to resist invasion by foreign powers during the wars of 1494-1516 By 1496 the Italian states were an obvious target for foreign interest and invasion: the concurrent period of economic and cultural expansion offered attractive incentives and rewards for an attack. This, combined with Italy's central and vulnerable geographical location meant that she was an obvious prey for armies from countries of the north. Indeed these factors, amalgamated with the motives of the Northern rulers: France had dynastic claims to Milan and Naples, with the latter claim being contested by Spain, suggest that the invasions that ensued from 1494 to 1559, were the consequences of specific economic, political and historical conditions and were not the sole responsibility of Italy or her aggressors. The Renaissance had, by the middle of the fifteenth century, achieved marked prosperity and comparative tranquillity within Italy. ...read more.

Through the commerce and trade some of the Italian cities had become increasingly prosperous and as a consequence had established oligarchical governments. This gradual rise of power of the merchants resulted in the divested significance of the Nobles, which induced a struggle for ascendancy in the form of many internal wars such as that between Genoa and Venice in the fourteenth century. Further historical conditions rendered the Italian states substantially divided: in northern and central Italy the population had been separated into two parties: Guelphs and Ghibellines. This political partition frequently climaxed in civil strife, which incurred a shifting succession of alliances, conquests and temporary truces. To mediate inter-state differences 'podestas' were appointed, however, this position evolved into a despotic power, which was not jurisdicted or managed under a single head of state or King. Consequently, each state had conflicting interests and motives, which in time of war or crisis culminated in the formation of self-protecting and strategic alliances that put the interest of preserving the state before the safeguard of the country as an entity. ...read more.

Furthermore the political and economic rivalry which the wars would have induced between the states, acted to augment their uncooperative attitudes towards each other. It is debatable how effectively the states would have been able to unite and resist attack even if circumstances had been different and if their relationships had been more cooperative. Certainly if Italy had been more aggressive and interested in achieving foreign colonies she would have appeared less submissive and less vulnerable to attack. The Renaissance can be regarded, therefore, as a decisive factor, which both provoked the Italian wars and sustained them for sixty-five years. The end of the Italian wars did not mark the end of Italian invasions by foreigners, however, as up to the eighteenth century Italy remained divided and subsequently under siege by foreigners. Italy's increasingly insular tendencies suggest that she was neither prepared nor equipped to fight off invasions and was too divided and lacking an overall central government to change or learn from her previous mistakes. ...read more.