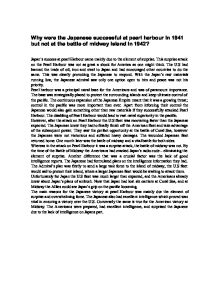 Why were the Japanese successful at pearl harbour in 1941 but not at the battle of midway Island in 1942?

Why were the Japanese successful at pearl harbour in 1941 but not at the battle of midway Island in 1942? Japan's success at pearl Harbour came mainly due to the element of surprise. This surprise attack on the Pearl Harbour was not as great a shock for America as one might think. The U.S had banned the trade of oil, iron and steel to Japan and had encouraged other countries to do the same. This was clearly provoking the Japanese to respond. With the Japan's raw materials running low, the Japanese admiral saw only one option open to him and peace was not his priority. ...read more.

The disabling of Pearl Harbour would lead to vast naval superiority in the pacific. However, after the attack on Pearl Harbour the U.S fleet was recovering faster than the Japanese expected. The Japanese knew they had to finally finish off the American fleet and take advantage of the subsequent power. They saw the perfect opportunity at the battle of Coral Sea, however the Japanese were not victorious and suffered heavy damages. The wounded Japanese fleet returned home. One month later was the battle of midway and a vital battle for both sides. Whereas in the attack on Pearl Harbour it was a surprise attack, the battle of midway was not. ...read more.

Unfortunately for Japan the U.S fleet was much larger than expected, and the Americans already knew about Japan's plans of ambush. Now that Japan had lost six carriers at Coral Sea, and at Midway the Allies could see Japan's grip on the pacific loosening. The main reasons for the Japanese victory at pearl Harbour was mainly due the element of surprise and overwhelming force. The Japanese also had excellent intelligence which proved was vital in ensuring a victory over the U.S. Conversely the same is true for the American victory at Midway. The Americans were prepared, had excellent intelligence, and surprised the Japanese due to the lack of intelligence on Japans part. ...read more.