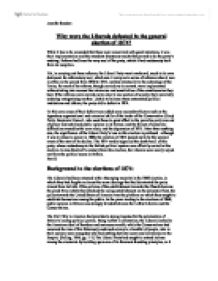 Why were the Liberals defeated in the general election of 1874?

Why were the Liberals defeated in the general election of 1874? While it has to be conceded that these were conceived with good intentions, it was their implementation and the attendant disastrous results that proved to be the party's undoing. Reform had been the very soul of the party, which it had assiduously built from its inception. Yet, in carrying out these reforms, the Liberal Party went overboard, much to its own detriment. Its reformatory zeal, which saw it carry out a series of reforms when it was in office in the period from 1868 to 1874, worked eventually to the advantage of the Tories, for most of its reforms, though carried out in earnest, were implemented without taking into account the intricacies and sensitivities of the constituencies they hurt. If the reforms were carried out to cater to one section of society, they invariably ended up antagonising another. Unable to balance these entrenched political institutions and lobbies, the party slid to defeat in 1874. To this core cause of their defeat were added some secondary factors such as the legendary organisational and oratorical skills of the leader of the Conservative (Tory) Party, Benjamin Disraeli, who used these to good effect in the years his party was out of power and mobilised public opinion in its favour, and the fallout of economic difficulties caused by the corn crisis, and the depression of 1873. More than anything else, the significance of the Liberal Party's loss in this election is profound -although it was to return to power in 1880, the election of 1874 turned out to be the seminal event of the start of its decline. The 1874 verdict signalled the death-knell of this party, whose redundancy to the British political system was officially sealed in this election. In less than half a century from this election, the Liberals were nearly wiped out from the political scene in Britain. ...read more.

The charge against them was that of murdering an English policeman when they attempted to rescue Fenian prisoners from a police van. The overwhelming evidence pointed to the fact that the policeman had died of just one bullet shot, but five men, all Irish were accused. Of these, three were executed, while it was widely believed that these men would also be set free in the way the other two were. This was widely seen as a gesture to please the English, who had to be mollified with some action for the killing of an Englishman. Added to this, the Catholics in Ireland were deeply hurt that these three devout men were not given even a decent burial. This event greatly hurt sentiments among the Irish nationals in England and the US for years to come. However, this was not an isolated incident; within just six months of this incident, another happened to exacerbate the already bitter feelings between the English and the Irish. In September of that year, in the same city, police arrested the leader of the Fenian demonstrations, Thomas Kelly and his associate. When they were being transported, an English policeman in charge of them was killed and these two men rescued. Again, five men were brought on trial, and three were executed. These served as milestones in the terribly troubled relations between the English and Irish communities.(Mcgee, 2001) This led to riots in England, and constituted the immediate legacy thatGladstone inherited; and his response was typical and predictable: reforms. Although no great sympathiser of the Irish cause earlier on in his career, once seated in the Prime Minister's saddle, he realised that things needed to be handled differently in Ireland. He was of the conviction that once the roots of the Irish problem were addressed, the problem would be sorted out automatically. These roots, he believed, lay in addressing the social problems in that country, whose redress would automatically dissuade the Irish from demanding independence, or even some sort of self-government. ...read more.

The result was that the British economy went into a state of downturn that led to serious repercussions for several years to come. The year of election saw British agriculture being given a series of blows, especially for crops that were dependent on the price corn commanded. This proved to be the catalyst for the Liberals' defeat in the 1874 election, because Gladstone's policies had no solutions to these problems. (Clark, 1962, p. 57) Part IV: Conclusion: So significant was the defeat of the Liberals in the 1874 elections that not only was the party to suffer from a setback it never recovered from, it also signalled the start of the end of liberalism as a political philosophy. In its birthplace, it died a quick, natural death. This is attributed to two major reasons -it did not adapt itself to the changing times and remained steadfast to the original goals it sought to achieve, even when they had become obsolete over time. Secondly, it could not extend its voter base to the working-class. Mass politics was never their forte, and "try as they might, British Liberals could not appeal to the collective will of new constituencies and simultaneously preserve their devotion to individual liberty. In England, the greater the philosophical need to synthesize liberty and positive government, the more irrelevant liberalism became." (Steigerwald, 1994, p. 5) From its heyday during the time when the likes of The Wealth of Nations by Adam Smith and On Liberty by Mill fed the intellectual development of the continent, culminating in the Reform Act of 1832 in which it sought to infuse the blood of liberty in Britain, (Hudelson, 1999, p. 59) its irrelevance was rapid; in the early years of the next century, it had become antiquated. The event that triggered the collapse of Liberalism and of the Liberal Party in England was the election of 1874. Though the Liberals did return to power later, they were severely hamstrung with organisational problems, and with the passing away of Gladstone, the party had, for all intents and purposes, seen its demise, too. ...read more.