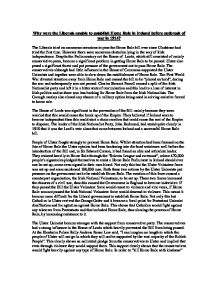 Why were the Liberals unable to establish Home Rule in Ireland before outbreak of war in 1914?

Why were the Liberals unable to establish Home Rule in Ireland before outbreak of war in 1914? The Liberals tried on numerous occasions to pass the Home Rule bill ever since Gladstone had tried the first time. However there were numerous obstacles lying in the way of Irish independence. Despite the Parliamentary act the House of Lords, which still consisted of mainly conservative peers, became a significant problem in getting Home Rule to be passed. Ulster also posed a significant threat and put pressure of the government not to pass Home Rule. The conservatives although had little influence in the House of Commons supported the Ulster Unionists and together were able to slow down the establishment of Home Rule. The First World War diverted attention away from Home Rule and caused the bill to be "placed on hold", during the war and subsequently was not passed. Charles Stewart Parnell caused a split of the Irish Nationalist party and left it in a bitter state of recrimination and this lead to a lose of interest in Irish politics and so there was less backing for Home Rule from the Irish Nationalists. ...read more.

This meant it became more difficult for the Liberal government to establish Home Rule. Not only this but Catholics in Ulster revived the Orange Order and it became a focal point for Protestant Unionist disaffection and for agitation against Home Rule. This shows that Catholics would fight against any takeover from Protestants and that included Home Rule, thus slowing the process of Home Rule, by increasing resistance to it. The Ulster Unionist became stronger with the support from conservative party. The conservatives had a strong influence in the House of Lords which heavily prevented the Bill from being passed. At the Blenheim Palace Rally Andrew Bonar Law said, "I can imagine no length to which the people of Ulster will not go in which they will not be supported by the vast majority of the British People". This clearly shows an unlimited pledge from the conservatives to Ulster and implied that even through violence they would support them. This support clearly shows that the conservatives would fight heavily against any type of Home Rule. In order to "kill Home Rule with kindness" the Conservative Government of Lord Salisbury followed a policy of allowing loans to tenant farmers who wished to buy out their landlords. ...read more.

Asquith's Liberal government backed down, claiming an "honest misunderstanding," and the men were reinstated. The War Office in London declared that the army would not be used to enforce the Home Rule Act, but the men who issued this statement were later forced to resign. The event contributed to Unionist confidence and this Unionist confidence meant that they were more prepared to resist the establishment of Home Rule The military solution to the factors preventing Home Rule was explored however it was impossible to diffuse these private armed by force because of the mishandling of the Curragh Mutiny. In conclusion the Curragh Mutiny did close any military solution for the resistance of Home Rule and it did increase the confidence of the Unionists. However it was more so the House of Lords, conservatives and Ulster Unionists who played a more major role in preventing establishment of the Home Rule bill. Although there was a lack of interest in Irish politics due to the Parnell scandal, it was mainly because the House of Lords which was made up of mainly conservative peers and the conservative support for Ulster which joins these three organisations together, and I believe it was these organisations that acted as the force pushing against the motion of Home Rule through parliament. ...read more.