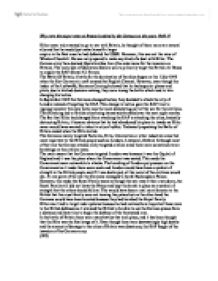 Why were the major cities in Britain bombed by the Germans in the years 1940-1?

Why were the major cities in Britain bombed by the Germans in the years 1940-1? Hitler never truly wanted to go to war with Britain, he thought of them more as a natural ally and that he would just make himself a larger empire in the East once he had defeated the USSR. However, this was not the view of Winston Churchill. He was not prepared to make any kind of a deal with Hitler. The German army then devised Operation Sea Lion (the code name for the invasion on Britain). The main idea of Operation Sealion was to primarily target the British Air Bases to cripple the RAF (Royal Air Force). The Battle Of Britain, a battle for the domination of the skies began on the 1 July 1940 when the first German air craft crossed the English Channel. ...read more.

This Blitzkrieg led to British cities being intensively bombed over the next eight months. The fact that Hitler had changed from attacking the RAF to attacking the cities, basically destroying Britain, it became obvious that he had abandoned his plans to invade as Hitler never would have wanted to inherit a city of rubble. Technically speaking the Battle of Britain ended when the Blitz started. The Germans mainly targeted Factories, Ports, Universities or other industrial areas that were important to the British people such as London, Liverpool, Oxford. Although most of the time the German attacks rarely targeted civilian areas there were sometimes terror bombings on the civilian areas. The main reason that the Germans targeted London was because it was the Capital of England and it was the place where the Government was seated. ...read more.

This would have been a real moral booster to the British that the royal family were not leaving the palace but on the other hand the Germans would have been boosted because they had bombed the Royal Family. Hitler also tried to target radar systems because he had realized how important these were to the British defences as it allowed the British to be able to see the German planes from a distance and have time to begin the defence of the threatened area. In the battle of Britain there were many battles that took place, and it has been thought that the Blitz was the final stage of it. Even though there were devastatingly high deaths and the amount of damage to the cities of Britain was disastrous, the RAF fought of the invasion of the German army. (583) ...read more.