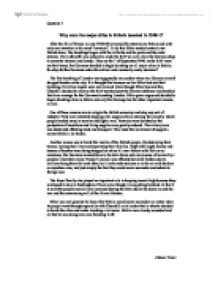 Why were the major cities in Britain bombed in 1940-1?

Why were the major cities in Britain bombed in 1940-1? After the fall of France in June 1940 Hitler turned his attention to Britain and with only one intention in his mind "invasion". To do this Hitler needed control over British skies. The bombings began with the airfields and the ports and the radar stations. The Luftwaffe was ordered to crush the RAF so as to allow the German ships to cross the channel and invade. Then on the 7 of September 1940, as the RAF were on their knees, the Germans decided to begin bombing on all major cities in Britain. ...read more.

Hitler grew angry and decided to begin attacking cities in Britain not only for Revenge but for other important reasons as well. One of these reasons was to cripple the British economy and stop any sort of industry. Ports were attacked stopping vital supplies from entering the country, which people needed most, to survive and fight a war. Factories were bombed so the production of munitions and living supplies was greatly reduced. The railway was also destroyed affecting trade and transport. This made the movement of supplies across Britain a lot harder. Another reason was to break the morale of the British people. By destroying their homes, ruining their lives and separating their families. ...read more.

The Royal family also played an important role in keeping morale high because they continued to stay in Buckingham Palace even though it was getting bombed. In fact it is said that peoples morale was increased during the Blitz due to the desire to end the war and the unwavering will of the Prime Minister. Hitler was not ignorant he knew that Britain would never surrender no matter what its people went through especially with Churchill as its leader that is why he decided to bomb the cities and make invading a lot easier. Britain was already wounded and all that he was doing now was finishing it off. Question 1 Zaheer Timol ...read more.