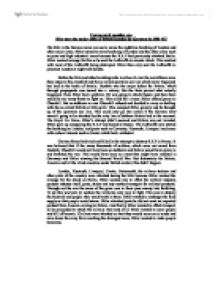 Why were the major cities of Britain bombed by Germans in 1940-41?

Course work question one Why were the major cities of Britain bombed by Germans in 1940-41? The blitz is the German name we use to name the nighttime bombing of London and other major cities. Hitler turned to terror bombing of London and the other cities such as ports and high industrial areas because the R.A.F had previously attacked Berlin. Hitler wanted revenge for this so he sent the Luftwaffe to counter attack. This resulted with most of the Luftwaffe being destroyed. Hitler then only sent the Luftwaffe to plummet London at night with bombs. Before the blitz and other bombing raids in cities all over the world there were three steps to this, Dunkirk and the so called operation sea lion which never happened but lead to the battle of Britain. ...read more.

This annoyed Hitler gravely and he thought up of the operation sea lion. This could only go into action if the German navy weren't going to be attacked by the only line of defence Britain had at the moment. The Royal Air Force. Hitler's attempt didn't succeed and Britain was not invaded. Hitler gave up conquering the R.A.F and turned to Russia. The Luftwaffe now started the bombing on London, and ports such as Coventry, Plymouth, Liverpool and areas with cultural interest such as Exeter which had a cathedral. German forces had tried and failed in the attempt to destroy B.E.F in France. It was believed that if the many thousands of soldiers, which were not saved from Dunkirk, Churchill would not have been so stubborn and Britain would have given in and forfeited the war. ...read more.

Hitler wanted also to affect the military industry, product industry itself, ports, docks and any method transport for military products. Through out the war the name of the game was to force your enemy into forfeiting. To do this you have to weaken the militaries only way to fight. This was to destroy the factories and people who would work in them. Hitler wanted to endanger the food supply so that people would starve. Hitler attacked ports he did not want an imported product from America coming to Britain. And finally Hitler wanted to effect transport so he proceeded to attack the railway. But most of all Hitler wanted to scare people and kill off morale. Civilians were attacked so that they would roam on to roads and slow down the army from reaching the damaged areas. Hitler wanted to make people homeless. ...read more.