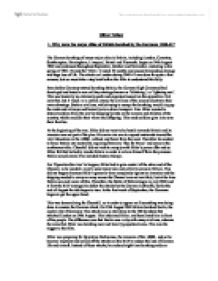 Why were the major cities of Britain bombed by the Germans 1940-41?

Oliver Tetlow 1. Why were the major cities of Britain bombed by the Germans 1940-41? The German bombing of many major cities in Britain, including London, Coventry, Southampton, Birmingham, Liverpool, Bristol and Plymouth, began on 24th August 1940 and continued throughout September, October and November, restarting in the spring of 1941. Named the 'Blitz', it lasted 10 months and caused tremendous damage and huge loss of life. The attack on London during 1940-41 was done for quite a few reasons, but we must take a step back before the Blitz to understand this fully. Even before Germany started bombing Britain, the German High Command had developed and tested a new military strategy known as 'blitzkrieg', or 'lightning war'. This was basically an extremely quick and organised assault on the opposition. Not only that, but it 'used', to a certain extent, the civilians of the enemy country to their own advantage. ...read more.

For 'Operation Sea lion' to happen, Hitler had to gain control of the skies and of the Channel, as he needed a way to send many men and artillery across to Britain. This did not happen because Hitler's generals were completely against an invasion and the shipping needed to carry an army across the Channel was not available, but at the time Britain was not aware of this. Therefore, the Battle of Britain began in July 1940 and at first the RAF managed to defeat the attacks by the German Luftwaffe, but by the end of August the tide began to turn. In the first week of September, the Germans began to get the upper hand. This was demoralizing for Churchill, so in order to appear as if something was being done to counter the German attack. On 25th August 1940 Britain bombed Berlin, the capital city of Germany. ...read more.

By doing this, Hitler aimed to seriously damage the British economy. Hitler also intended to disrupt wartime production to give the advantage in the war; if you destroy Britain's bullets and guns, they can't fight the war. They targeted lines of transport, because this would stop weapons being taken to the army. Across Britain the Luftwaffe tried to hit railway lines and junctions, power stations and ports. They also bombed weapons factories themselves, to stop the source of the firepower. In addition, Hitler wanted to destroy the morale of the British people, especially the Londoners, who were bombed nightly, because this would have a direct effect on government policy. If people do not like the war and do not think it is worth fighting for, then they will simply not support it; men would 'dodge the draft', people would be weakened, and spending could be seriously affected, which would reduce government income through taxation. The government needed this support, which is why Hitler attempted to strike the confidence the British people had in their country's management. ...read more.