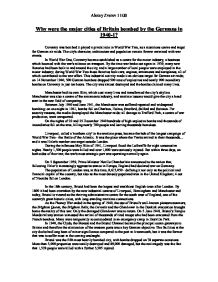 Why were the major cities of Britain bombed by the Germans in 1940-1?

Why were the major cities of Britain bombed by the Germans in 1940-1? Coventry was bombed it played a pivotal role in World War Two, as a munitions centre and target for German air raids. The city's character, architecture and population remain forever entwined with war events. In World War One, Coventry became established as a centre for the motor industry, a business which boomed with the war's reliance on transport. By the time war broke out again in 1939, many new factories had been built in and around the city, and a large number of local people were employed in the motor industry; during World War Two these factories built cars, engines, armaments and aeroplanes, all of which contributed to the war effort. This industrial activity made it an obvious target for German air raids; on 14 November 1940, 500 German bombers dropped 500 tons of explosives and nearly 900 incendiary bombs on Coventry in just ten hours. ...read more.

Nearly 1,500 people were killed and over 1,000 were seriously injured. But within three days, on both sides of the river, the war's most strategic port was operating normally again. On 3 September 1939, Prime Minister Neville Chamberlain announced to the nation that, following Hitler's increasingly aggressive stance in Europe, England had declared war on Germany. The population of London was, at this time, 8,615,050 - defining it not only as the political and financial capital of the country, but also as the most densely populated area in the United Kingdom; 4 out of 5 bombs fell on London. In the 18th century, Bristol had been the largest and wealthiest English town after London. By 1800 it had been overtaken by the new industrial centres of Liverpool, Birmingham and Manchester and today, Bristol is viewed as the thriving administrative centre for the south west of England, one of the country's great historic cities, with long-standing maritime connections. As the Phoney War ended in the spring of 1940, the use of Bristol's well-known pleasure steamers, the Brighton Queen, the Brighton Belle, the Devonia and the Glendower in the Dunkirk evacuation brought home the reality of this war. ...read more.

The Bristol Aeroplane Company's factory at Filton, north Bristol, was a key installation in the war effort. The Americans selected Bristol as their chief base for importing war materials, and the port at Avonmouth was a major component of the Allied war effort. Birmingham is the second largest city in the United Kingdom and is renowned as the city of a 1,000 trades. Both its people and industry played a vital role in the British war effort, but that essential contribution is little known outside the city. The array of war work in Birmingham was staggering. Bristol Hercules engines made at Rover; Lancaster wings, shell cases and bombs manufactured at Fisher and Ludlow's; Spitfire wing spans and light alloy tubing at Reynold's; and plastic components at the GEC; up to the Battle of Britain all the aero-carburettors for the RAF's Spitfires and Hurricanes were made at SU Carburettors - and if it had been destroyed the air force would have suffered a mortal blow. Serck produced all the radiators and air coolers for these planes. In the city of Clydebank, the blitz was carried out on its' major shipbuilding industry. ?? ?? ?? ?? Alexey Zverev 11GS ...read more.