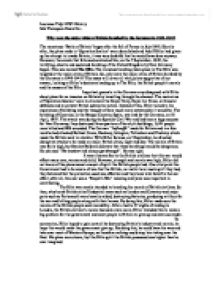 Why were the major cities of Britain bombed by the Germans in 1940-1941? The monstrous 'Battle of Britain' began after the fall of France in July 1940. Shortly after, the plans made in 'Operation Sealion' were demolished and Adolf Hitler had given up his attempt to invade Britain; it was very doubtful that he would have done anyway. However, the events that followed contrasted this; on the 7 September, 1940, the terrifying, chaotic and sustained bombing of the United Kingdom by Nazi Germany began. This was named The Blitz. The immense bombing taken place in The Blitz was targeted at the major cities of Britain. ...read more.

This attack was during the Spanish Civil War and had been a huge success for Nazi Germany; they destroyed three quarters of the city's buildings, 1,654 people were killed and 889 wounded. The German "Luftwaffe" made for Britain and in a few months had attacked Bethnal Green, Hackney, Islington, Tottenham and Finchley which made the British want to retaliate. With Hitler furious, on 5 September, he directed disruptive attacks to be made on major British cities, night and day. The morale of Britain was fairly high, but Stanley Baldwin did state that these bombings would be dangerous. He claimed "The bomber will always get through". ...read more.

By doing this, Hitler made sure the morale of the British people sank incredibly. After a hectic 57 nights of raiding in London, the British civilian's morale had sank even more; Hitler intended this to make a big problem for the government and want people in Britain to give up and even surrender. To summarise, Hitler hoped to gain control by destroying Britain's industry and morale; he hope this would make the government give up. By doing this, he could have his way and take over most of Western Europe, so therefore nothing could stop him taking over the East. His plans were clever, but the Blitz spirit the British possessed was higher than he ever imagined. Laurence Tidy 10W1 History Mrs Thompson Exam No.: ...read more.