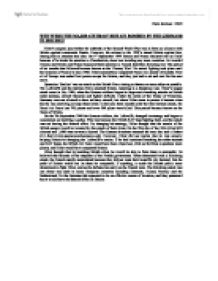 WHY WERE THE MAJOR CITIES OF BRITAIN BOMBED BY THE GERMANS IN 1940-1941? Hitler's original plan before the outbreak of the Second World War was to form an alliance with Britain against communist Russia. However, his actions in the 1930's turned Britain against him, forcing him to abandon this idea. On 3rd September 1939 Britain and France declared war on Hitler because of he broke his promise to Chamberlain, about not invading any more countries. He invaded Poland, and Britain and France honoured their promise to Poland, therefore declaring war. The period of six months that followed became known as the 'Phoney War'. No actual fighting took place until the invasion of France in may 1940. Hitler successfully conquered France in a matter of months. Now all of Europe was under Nazi power except for Britain, and they just had to sit and wait for his next move. Operation 'Sealion' was an attack on the British Navy aiming to destroy as many ships as possible. The Luftwaffe and the German Navy attacked Britain, resulting in a disastrous loss. Hitler's largest attack came in July 1940, when the German airforce began its large-scale bombing attacks on British radar stations, aircraft factories and fighter airfields. ...read more.

Some families, if they owned a grand piano, slept underneath these because they offered great defence to attack. Every night, the wail of the air-raid siren announced the approach of the German bombers, therefore ensuring that citizens had plenty of time to find cover and protect themselves. Citizens that had voluntarily joined organisations such as the Auxiliary Fire Service and Air Raid Precaution Wardens (ARP Wardens) helped to keep the civilians as safe as possible during the attacks by ensuring crowd control, helped heavy rescues, types of demolition and fire-fighting. The night was spent in what ever form of shelter people could find until near dawn when the all clear sounded and it was possible to return home. After a night in whatever form of shelter men would go off to work as normal, children back off to school and women would be off the grocers or butchers with the issued ration books to get the weekly supply off food. Food was rationed because merchant ships that brought food from foreign countries were being sunk on their way to Britain, and therefore not only was there a shortage of food, but prices rose due to this. Only the rich families were able to feed their families properly, so when rationing was introduced, it was welcomed by a large percentage of the population. ...read more.

The King and Queen deciding not to send their daughters away as part of the evacuation programme, and themselves to stay in the country also served as positive propaganda, really showing the people that the King and his family were fully committed to serving their country. A highly successful piece item of propaganda used by the government was one to promote the growth of carrots. There was a short supply of food and the country needed all the extra food it could get. In order to get farmers and people that lived and worked in the country to grow more carrots, the government began a highly successful campaign stating that carrots help you see in the dark. This increased the production of carrots immediately, because with the current blackout, people wanted to be able to see in the dark. This is a worthy form of propaganda, as many people still believe and tell this myth today. For much of the war there was support for the government and determination to win but at times there was apprehension and fear. Some people may have felt more negative about the war and the government, but a lot of the bad news was covered up and the government encouraged positive propaganda to keep up morale. Throughout the war the government used many forms of propaganda to hide the devastating effects many form and stop negative affect on the British population. Claire Javeleau 11KJH ...read more.