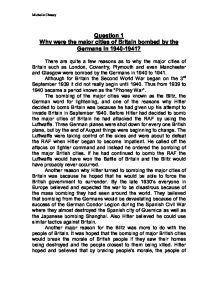 Question 1 Why were the major cities of Britain bombed by the Germans in 1940-1941? There are quite a few reasons as to why the major cities of Britain such as London, Coventry, Plymouth and even Manchester and Glasgow were bombed by the Germans in 1940 to 1941. Although for Britain the Second World War began on the 3rd September 1939 it did not really begin until 1940. Thus from 1939 to 1940 became a period known as the "Phoney War". The bombing of the major cities was known as the Blitz, the German word for lightening, and one of the reasons why Hitler decided to bomb Britain was because he had given up his attempt to invade Britain in September 1940. Before Hitler had decided to bomb the major cities of Britain he had attacked the RAF by using the Luftwaffe. Three German planes were shot down for every one British plane, but by the end of August things were beginning to change. ...read more.

Also Hitler believed he could use similar tactics against Britain. Another major reason for the Blitz was more to do with the people of Britain. It was hoped that the bombing of major British cities would break the morale of British people if they saw their homes being destroyed and the people closest to them being killed. Hitler hoped and believed that by braking people's morale, the people of Britain would then force the British government to surrender to the Germans. Hitler also bombed the major cities of Britain in an attempt to destroy industry. The London Docks were attacked regularly too. The German airforce, the Luftwaffe, also tried to bomb gas-holders, power stations, railway lines and junctions. These were the things that were of importance to the British people, which they needed, in their daily lives. Other major cities such as Coventry, Plymouth and Liverpool were bombed as some were major industrial areas e.g. ...read more.

Also, most British fighters were unable to fly at night, so the Germans were virtually unopposed and were able to do what they wanted to do. As you can see there are quite a few reasons as to why the Germans bombed the major cities of Britain, but the reasons all lead to the same conclusion. The conclusion being that Hitler hoped to gain control over Britain by forcing the British government to surrender. He hoped to do this mainly by bringing down their morale and industry. In this way Hitler would control most of Western Europe which is what he wanted to do. Hitler's main interest was in the East though. Hitler knew he could not invade Britain as Germany did not have the ships available to carry troops over the English Channel and so Hitler hoped that by bombing the major British cities he could force Britain into surrendering. In that way he could control the west of Europe and there would be no one to stop him take control of East. Michelle Chasey ...read more.