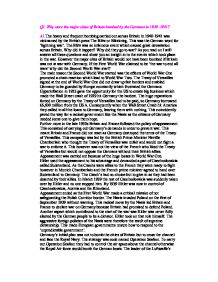 Q1. Why were the major cities of Britain bombed by the Germans in 1940-1941? A1.The heavy and frequent bombing carried out across Britain in 1940-1941 was nicknamed by the British press The Blitz or Blitzkrieg. This was the German word for 'lightning war'. The Blitz was an infamous event which caused great devastation across Britain. Why did it happen? Why did they go to war? As you read on I will answer all these questions and show you an insight in to the events which took place in the war. However the major cites of Britain would not have been bombed if Britain was not at war with Germany. If the First World War claimed to be 'the war to end all wars' why did the Second World War start? The main reason the Second World War started was the effects of World War One promoted a chain reaction which lead to World War Two. The Treaty of Versailles signed at the end of World War One did not draw up fair borders and enabled Germany to be guarded by Europe constantly which frustrated the Germans. Hyperinflation in 1923 gave the opportunity for the US to create big business which made the Wall Street crash of 1929 hit Germany the hardest. ...read more.

The RAF spitfires and Hurricanes were guided to their target by radar. This new technology enabled them to fight the Germans with a little more ease however they still suffered badly from attacks on their airfields and radar stations. Throughout August the battle continued and both sides endured heavy losses. In September the Luftwaffe bombed London, which allowed the RAF and radar stations to recover. The Germans lost the Battle of Britain because when the Luftwaffe's started bombing Britain the RAF recovered from their heavy losses and put together a stronger air force which defeated the Germans. Hitler was forced to postpone and later abandon Operation Sealion as they could not control the air space above the channel which was a crucial aspect of Operation Sealion. This huge failure by the Luftwaffe changed the German strategy they concentrated on bombing London and the major cities of Britain which was know as the Blitz. The main aim of the Blitz was to hinder the war effort. To carry out this task Germany bombed the major cities frequently targeting industrial and civilian sites. The Blitz started on the 7th September 1940. The map attached shows all the place which were bombed in England In that month alone the Luftwaffe dropped 5,300 tons of high explosives on London. ...read more.

When the Blitz was over the occasional raids were carried out in 1941-1944 which would later be know as the Little Blitz. The Germans stop bombing Britain as frequently as they turned there attention towards Russia. However the true existent of the damage was shown as it had destroyed well know landmarks, shops, offices and factories. 30,000 people were killed during the war in London and a further 50,000 were seriously injured. Hitler's strategy of bombing the major cities was effective as it focused on destroying the industrial and civilian targets. The main aim of this was to destroy the war effort and spirits of the British public. However Britain won the Battle of Britain boosting the country's spirits as Operation Sealion was not put in to effect. The war would not have even started if world war one had not paved the way for the Battle of Britain and the Blitz to start. Appeasement was also a factor which contributed to the start of the war enabling Hitler to use this policy to his advantage. If Germany had only focused on Britain and not attack Russia the bombing would have continue. Nevertheless Germany stopped bombing Britain so frequently giving time for Britain to recover and later win the war. Jack The Ripper By Seniz Ibrahim ...read more.