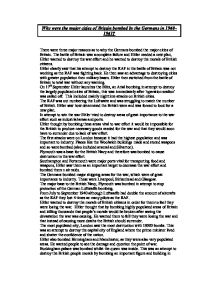 The first attacks were on London because it had the highest population and was important to industry. Places like the Woolwich buildings made and stored weapons and so were bombed (also included arsenal and Silverton). Plymouth was a base for the British Navy and therefore was bombed to cause destruction to the war effort. Southampton and Portsmouth were major ports vital for transporting food and weapons, Hitler saw them as an important target to decrease the war effort and bombed them n air raids. The Germans bombed major shipping areas for the war, which were of great importance to industry. These were Liverpool, Birkenhead and Glasgow. The major base to the British Navy, Plymouth was bombed in attempt to stop protection of the German Luftwaffe bombing. ...read more.

Hitler also bombed Birmingham and Manchester, as they were also very populated areas. He wanted people to see the damage and question the point of war. Buckingham palace was bombed whilst the queen was inside. This was an attempt to destroy the British people morale by bombing an important figure and building in history. He wanted the British to think that the war was causing too much destruction and ruining the riches of their country. Therefore the bombing of the major cities in Britain was caused from the failure of the battle of Britain and was an attempt to destroy war effort and morale. I feel the most important reason was to destroy war effort as without and navy bases, ports and buildings vital for industry such as making and storing weapons the British would clearly loose and have no choice but to surrender. ...read more.