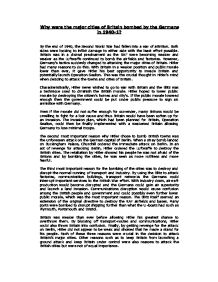 Why were the major cities of Britain bombed by the Germans in 1940-1?

Why were the major cities of Britain bombed by the Germans in 1940-1? By the end of 1940, the Second World War had fallen into a war of attrition. Both sides were looking to inflict damage to either side with the least effort possible. Britain was in a dismal predicament as the RAF were becoming weaker and weaker as the Luftwaffe continued to bomb the airfields and factories. However, Germany's tactics suddenly changed to attacking the major cities of Britain. Hitler had many reasons to do this. With Britain in a weaker position and public morale lower than ever, it gave Hitler his best opportunity to invade Britain and potentially launch Operation Sealion. ...read more.

The invasion plan, which had been planned for Britain, Operation Sealion, could then be finally implemented with a weakened Britain allowing Germany to lose minimal troops. The second most important reason why Hitler chose to bomb British towns was the unforeseen attack on the German capital of Berlin. When a stray bomb landed on Buckingham Palace, Churchill ordered the immediate attack on Berlin. In an act of revenge for attacking Berlin, Hitler ordered the Luftwaffe to destroy the British cities. The retaliation by Hitler showed his people he was not afraid of the Britons and by bombing the cities, he was seen as more ruthless and more fearful. The third most important reason for the bombing of the cities was to destroy and disrupt the normal running of transport and industry. ...read more.

The Blitz itself seemed an extension of the original directive to destroy the RAF airfields and bases. Many ports were bombed to disrupt shipping further than what the U-boats had such as Plymouth, Portsmouth and Bristol. Britain was weaker than ever before allowing Hitler his greatest chance to overthrow them. By blocking off transport-routes and communications, Hitler could also throw Britain into confusion. Finally, by getting revenge for the attack on Berlin, Hitler did not appear to be weak and showed that he made a stand for his people. Each of these three reasons were crucial in the decision to attack Britain's major cities. Other reasons such as to keep Britain from launching a ground attack and keep Britain under control were also reasons to attack the British cities but were not of equal importance. ...read more.