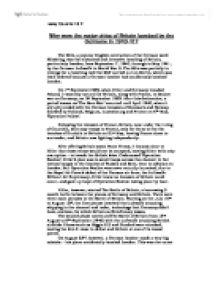 Why were the major cities of Britain bombed by the Germans in 1940-41? The Blitz, a popular English contraction of the German word Blitzkrieg, was the sustained and intensive bombing of Britain, particularly London, from September 7, 1940, through to May 1941, by the German Luftwaffe in World War II. The Blitz was partially in revenge for a bombing raid the RAF carried out on Berlin, which was itself ordered because a German bomber had accidentally bombed London. On 1st September1939, when Hitler and Germany invaded Poland, it was only natural for Britain, along with France, to declare war on Germany, on 3rd September 1939. After this declaration, a period known as 'The Bore War' occurred until April 1940, when it abruptly ended with the German invasion of Denmark and Norway, followed by Holland, Belgium, Luxembourg and France on 6th May, 'Operation Yellow'. Following the invasion of France, Britain, now under the ruling of Churchill, sent may troops to France, only for them to flee the beaches of Dunkirk to Britain on 21st May, leaving France alone to surrender, and Britain now fighting independently. ...read more.

This was the cause of Britain to start its bombing campaign on Berlin, causing lots of damage and destruction, but also giving Hitler the provocation to bomb London - this was the start of the Blitz - (HITLER'S QUOTE). Starting on 3rd September, Hitler, in retaliation to the R.A.F. attacks on Berlin, ordered the Luftwaffe to attack London for the first time. This, an event that simply accidentally grew out of the Battle of Britain, was the start of The Blitz. Though the main cause for this attack on Britain was revenge for them bombing Berlin, Hitler also bombed London as he had no alternative, especially after that Battle of Britain on 15th September, and after Hitler finally postponed Operation Sealion on 17th September. This tactic, of bombing a country into surrender was no stranger to the Germans, as it'd had first been used during The Spanish Civil War, in Guernica, and then again in Poland. ...read more.

The third, and final, aim for Hitler bombing the cities of Britain was to destroy the countries infrastructure, in the hope that Britain simply wouldn't be able to continue, with no equipment to fight. Hitler disrupted many communications and caused a lot of chaos by bombing ports, roads, bridges and railways, as well as airfields; to destroy planes and their bases. This plan, though possibly the cleverest and most likely to succeed, fortunately, did not force Britain to surrender. In conclusion, there are many reasons as to why the major cities of Britain were bombed, but the simplest answer was to force Britain to surrender. Though Hitler always had revenge for Berlin in mind, his tactics show that lowering morale, causing destruction and ruining Britain's chances in winning the war, by destroying communications and equipment, were all aims of his in trying to win the war. ?? ?? ?? ?? Lacey Cousins 10 E ...read more.